A look back: Palestine & the AFC Challenge Cup

January 24, 2009
With the 2010 AFC Challenge Cup qualifiers coming up and the national team in preperations for them, its worth a look back at Palestine's first appearance in the inaugural 2006 AFC Challenge Cup. Click here for full overview of that tournament.

Held every 2 years, the 'ACC' was created by the Asian Football Confederation for its "emergent" members to compete in as a means of developing the game in those countries. The 2006 AFC Challenge Cup was held in Bangladesh. Palestine were among the favorites to win the cup and went in on a high as they defeated ASEAN champions Singapore in their Asian Cup qualifiers group just months before. The hero of that match, Fahed Attal, made his intentions of topping the scorer table clear before heading off to Dhaka. Unlike the squad that defeated Singapore, the AFC Challenge Cup squad consisted mainly of domestic players with the exception of Roberto Kattlun and Francisco Alam.
Palestine was in group C alongside Cambodia, Guam and hosts, Bangladesh.
As the opponents were markedly weaker, Coach Mohamed Sabah fielded a 3-5-2 formation. A sharp contrast to the defensively inclined formations used in World Cup and Asian Cup qualifiers.
The first match was vs Guam and promised to be a one-sided drubbing. And that it was. It ended 11-0 for the Palestinians, Fahed Attal netting 6, supported by goals from Ahmad Keshkesh, Ziyad AlKord, Francisco Alam and Ismail Amour. Couldnt have asked for a better start at the Bangabandhu National Stadium.
Next up came Cambodia who lost 1-2 in their opening match against Bangladesh. Palestine won 4-0. 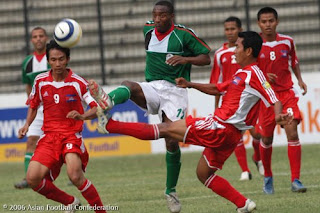 The first two matches went as expected with Palestine guaranteeing progress to the quarterfinals. The final group match was against Bangladesh who also won their first two matches. The winner would top the group and avoid facing Tajikstan. On paper, Palestine had the upper hand recording bigger victories against the same opponents. The match ended in a 1-1 draw with Palestine topping the group.
Palestine was showing signs of slowing. Its important to note that the domestic league was in hiatus at the time which meant that most of the players werent in top shape. Playing three matches in 6 days in the Dhaka heat certainly took its toll on the players.
In the quarterfinal we were set to play Kyrgyzstan and it definitely looked to be a challenging fixture.
The match was even-handed with Fahed Attal coming close a few times but not finishing. It ended with Kyrgyzstan grabbing a late winner in injury time. And with that, Palestines 2006 AFC Challenge Cup hopes were dashed. But there was some compensation as Fahed Attal emerged as top scorer of the tournament.

Back to 2009. The next AFC Challenge Cup will be in 2010 in India. There will be qualifiers in April and Ezzat Hamza has named a list of 32 domestic players who will be narrowed down to 25 before joining a training camp with foreign based players. The stakes are much higher this time as the winner qualifies automatically to the 2011 Asian Cup.