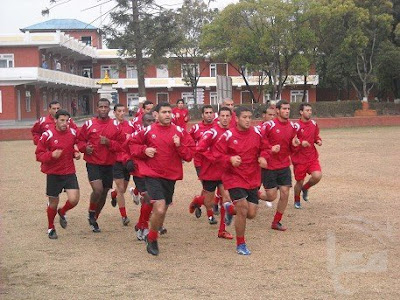 Well, it is just about 24 hours until kick-off of one of the most important football games in Palestine's short (FIFA affiliated) history. I am not one for hyperbole, but I feel that this tournament will set the tone for Palestinian football going forward. Under Alferd Riedl and Azmi Nasar Palestinian football gained credibility on the pitch. Not only was the team adept at defending draws and slender leads but it could also compete with any number of teams in the region playing POSITIVELY. After setting the world alight at the innaugural AFC Challenge Cup in 2006 with attacking and skillful play which saw 11-0 and 4-0 routs of Guam and Cambodia, respectively, the future seemed bright. There was also a promising Asian Cup Qualification campaign where Palestine managed a 1-0 win over Singapore and a 2-2 draw against eventual champions Iraq.

In an almost sudden an abrupt manner, the political situation, as it so often does threw a wrench in the Palestinian's quest for World Cup glory. Preparations for the World Cup qualifier were marred by a lack of training time and proper preparation. To make matters worse, several players, including captain Saeb Jendeya were refused travel permits by the Israeli authorities. The lack of fitness, preparation, and general teamwork showed as Palestine crashed to a 4-0 defeat in Qatar at the hands of Singapore. The return leg was never played, as a whopping 15 domestic players were barred from traveling to Singapore. The following year, Palestine played a mere two matches against Iran and Iraq in the WAFF Championship lacking offensive prowess but by no means spirit they fell 2-0 and 1-0 respectively. In 2008, Palestine again participated in the WAFF Championship, but could not manage a goal falling 1-0 and 3-0 to Qatar and Iran.

After two years of no goals and no points, it felt that Palestinian Football was regressing but the latter months of 2008 brought hope. Ramzi Saleh, the national team goalkeeper, was signed by Egyptian giants Al-Ahly. CD Palestino of the Chilean Primer League reached the Apertura final. And of course, a new stadium, built to FIFA standards was to open up on Palestinian soil and a full international would be played against arch-rival Jordan. That game, as we all know, ended in a 1-1 draw with Ahmad Keshkesh opening the scoring on a slick counter-attack and cool finish that sent the 8,000 person crowd into utter delirium. That goal, and that result proved that we could play football in a positive manner and hang with any team on the Asian continent. I am confident, that the next week will bring all of us fans much joy, win, lose or draw. We are all on the edge of our seats waiting in anticipation, because it seems that big things are in store for our beloved Fursan.
AFC Challenge Cup