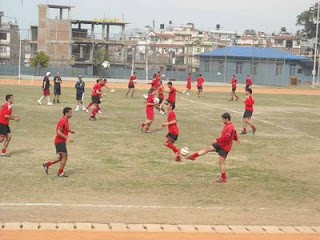 In light of the 1-1 draw between Nepal and Kyrgyzstan, the final match of the group between Palestine and Kyrgyzstan will prove to be the decider. The Palestinians need a win to secure a spot in the AFC Challenge Cup final tournament and any draw other than 0-0 will suffice for Kyrgyzstan.
This is not the first time the two teams will meet, they already played out a quarterfinal match in the inaugural AFC Challenge Cup three years ago in Dhaka. Kyrgyzstan won that match with a last minute goal to end it 0-1, sending a worn out Palestinian squad out of the tournament after its strong start.
The opening match of this group saw Palestine take on group hosts Nepal in what was expected to be a rather one sided match but the Nepalese proved pundits wrong with a strong display threatening to score on a number of occasions. Though the match ended scoreless, the performance motivated the Nepalese squad to unleash an onslaught in their second match of the group vs Kyrgyzstan. In front of thousands of homefans they took the lead in the second minute and missed a number of opportunities to increase it. To their dismay, Kyrgyzstan was awarded a penalty in the 86th minute when Biraj Maharajan, the player who put Nepal in the lead, mishandled the ball in the penalty box. Murzaev Mirlan equalised from the spot and thats how the match ended.
Since the day after the Nepal match, the national team has been training daily and studying videos of the match to analyze mistakes. Palestine players and coaching staff watched the Nepal-Kyrgyzstan match from the stands of the Dashrath Rangasala to gain insight into their opponent. According to Ashraf Matar, the reporter embedded with the squad, the Kyrgyz team appeared sluggish and couldn't keep pace through the whole match. But nonetheless, Kyrgyzstan should not be underestimated. Recall their slow start to the tournament in 2006 when they lost to Pakistan in their opening match only to later defeat Tajikstan and Palestine.
Ezzat Hamzah is expected to field an offensive formation as a win is the only result that will see Palestine go through.