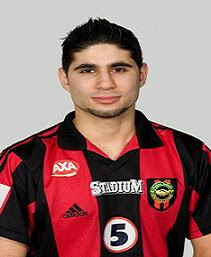 An Egyptian Daily has stated that Egyptian Giants Zamalek are preparing a revised bid for Palestinian winger Imad Zatara who currently plays for Syrianska in the Swedish Superettan (first division). Zamalek had agreed terms with Zatara after a week long trial during the winter break, the two clubs however, failed to reach an agreement over the transfer price and the deal fell through. If Zatara does move to Zamalek he will be the third Palestinian playing in Egypt's Premier League joining the likes of Al-Ahly goalkeeper Ramzi Saleh and Petrojet midfield general Mohammed Samara. After coming up through the ranks at Vasalunds IF Zatara made the jump to the Allsvenskan with Brommapojkarna he had a brief stint with Hungarian Premier League side Zalaegerszegi TE before returning to Sweden with Syrianska.
Imad Zatara Palestinians Abroad