A Look Back: Palestine v Iraq

July 07, 2009
Asian Cup qualifiers, World Cup qualifiers, West Asian Games, you name it..at 8 encounters, Iraq is the team we have faced the most in the last decade. A detailed archive can be found here at kooora.

As evident, Iraq has had the clear upper hand winning six of the matches. But lets look at the other two which were, to say the least, memorable to Palestinian fans...
31/03/04 World Cup Qualifier - Doha, Qatar 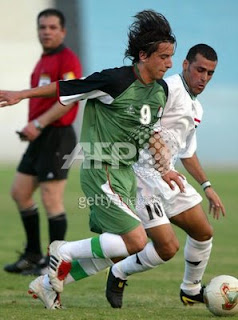 In the 2006 World Cup Qualifiers, Palestine and Iraq were drawn together alongside Taiwan and Uzbekistan. This was Palestine's second attempt at qualifying after being re-affiliated in 1998 and they opened their qualifying campaign impressively, drubbing Taiwan 8-0 in Doha(both Palestine and Iraq used Doha as home in these qualifiers though Palestine was the designated home team in this match).
Iraq opened in the 20th minute through Razzaq Farhan's header. Then in the second half at minute 72, Roberto Kettlun drove a brilliant free kick into the net.


(Note: Person who uploaded the video dubbed it with unrelated commentary. Clearer shot of the goal can be found in this vid @ 1:45)

The free kick was Kettlun's finest moment in his international career and it gave him hero status among fans who dubbed him, المايسترو('The Maestro') and الساحر(~Magician). With this draw, Palestine topped the group until qualifiers resumed in June.

06/09/06 Asian Cup Qualifier - Al-Ain, UAE
In the 2007 Asian Cup qualifiers, Palestine and Iraq were drawn in Group E with China and Singapore. This was the 'return leg' of the match played in Amman a few weeks before where Iraq won 3-0(where I watched painfully from the stands).
Following that defeat and missing the South American contingent, Palestine were clearly not favorites and needed a result to have any chance of qualifying.

Fifteen minutes in, Tayseer Amer took advantage of a defensive error and put Palestine in the lead. Saeb Jendeya led the defense against the Iraqi onslaught that followed and, thanks to the ultra-defensive play, they successfully held the Iraqi's back through the first half. However in the second half, Saleh Sudair took a shot which deflected off Jendeya and sent Ramzi Saleh the wrong way, equalising the score. Iraq then took the lead with a trademark Hawar Mulla Mohamed free kick. By then it seemed all over for Palestine but another Iraqi defensive error put them back in the game. After receiving a long pass across the field from Majed Abusidu, Tayseer Amer crossed the ball into the box. Keeper Serhank Mohsen jumped for the ball but collided with Ali Nassar and mishandled it, and it fell at the feet of Ismail Amour who put it in the roof of the net.
When the referee blew the final whistle I felt like I had gotten off a roller coaster. This result meant that we needed to beat China in Amman and get a result against Singapore to qualify to the Asian Cup. Needless to say, that didn't happen. Oh, and Iraq went on to win the Asian Cup.

On Friday we are playing Iraq in Arbil. Let us look forward to a good match where the team can benefit and whatever the result, we can congratulate Iraq on their return to home soil.
Asian Cup Qualifiers Iraq Ismail Amour roberto kettlun World Cup Qualifiers