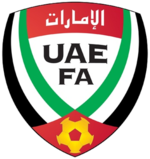 So Palestine is in action for the first time since the summer friendlies against Iraq and China. It will be the second match with Moussa (Tits Man) Bezzaz at the helm. Squad selection sees Ramzi Saleh return to the fold for the first time in 13 months. Five other foreign-based players will surely find themselves in the first XI. Abdaltif Bahdari should marshal the defense with Tadamon left-back Majed Abusidu patrolling the left flank. Much needed offense should be provided by the Jordan-based triumvirate of Ahmad Keshkesh, Fahed Attal, and Fadi Lafi. Don't be surprised however if one of them is left on the bench in favor of a defensive midfielder.
Most UAE fans are probably focusing on the U-20 side's World Cup quarterfinal match against Costa Rica. As a result, the Emiratis will be missing their two young goal-getters Faisal and Ahmed Khalil. Look for the danger up top to be provided through Ismail Matar.
Prediction: Palestine's squad is slightly stronger than the squad that faced China, the presence of Ramzi Saleh alone (one of the best shot-stoppers in Asia) makes a world of difference. Al-Fursan are also expected to be cheered on by a sizable Palestinian contingent... and if UAE league games are anything to go by Palestinian fans might just outnumber Emirati fans. So prediction time... with Ramzi Saleh in goal anything is possible. 1-1 with Saleh making at least a dozen amazing saves.
General Match Information: 2:45 GMT, Al-Wasl Stadium, UAE. Streams maybe available here. Alternatively, Arabic speakers can check for updates on Palestine's kooora forum where a kind soul may have posted a stream.
Friendly Mousa Bezaz palestine UAE