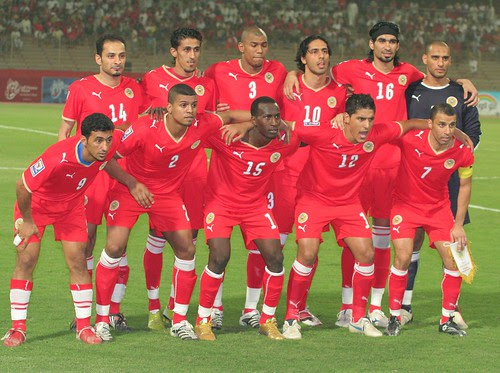 Apparently the Palestine FA and its Bahraini counterpart agreed to arrange a friendly match to be played at the Faisal Husseini stadium in Al Ram. The agreement remains on the FA level and the Bahrainis are waiting for an ok from their government. UAE newspaper Al Bayan reports that the proposed match was met with opposition in the Bahraini parliament. The reason:

Bahraini players will need Israeli visas to cross into Al Ram. Egypt's olympic side gave the same reason for withdrawing from a friendly last month. The argument goes that the act of applying for and receiving the visas is a step towards normalization(or in the case of Egypt, further normalization) of relations with the occupying entity. Arab countries, with the exception of Jordan and Egypt, have no official ties with Israel.

The Bahraini FA and proponents of the visit argue that, visas or no visas, the match is an act of solidarity with the Palestinian people. According to Palestinian news agency Ramattan, Palestine FA president Jibril Rajub echoed these sentiments, denying that the visa process in anyway represents normalization. Rajub said that Israel's role is merely that of a gatekeeper, and that all papers will be processed by Palestinians.

Come on Rajub, don't insult their intelligence. We all know full well that Israel has the final say as to who gets to cross. So it is up to the Bahraini's, if they decide to come, we'll welcome them with open arms. If they don't, we understand.
Al Ram Bahrain Faisal Husseini Stadium Friendly