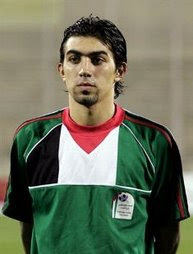 Palestine wingback Majed Abusidu has been voted Tadamon's best player of the season by the club's fans. Abusidu gained a whopping 37% of the vote. Tadamon who have struggled mightily this season, gaining 5 points from 20 matches, go into the final matchday needing at least a point to have a shot of survival at staying in the first division. The team is in luck as fellow relegation candidates Al-Salibikhaet play championship-chasing Kuwait SC. Tadamon and Abusidu, on the other hand, play third to last Salimiyah. Abusidu should have plenty of motivation, playing against the club that scuppered his moves to Egyptian powerhouse Al-Ahly and fellow KPL side Kazma- a team in the round of 16 of the AFC Cup.
Kazma Kuwait Premier League Majed Abusidu Tadamon