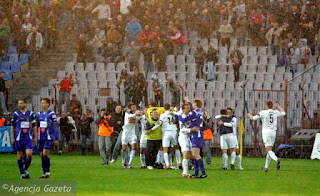 What a turn of fortunes. All the way back in July, Jarun was knocked out of the Polish Cup with Flota Swinoujscie. After a move in the winter transfer window to Pogon Szczecin, Jarun stepped in to help the Pomeranian club navigate a path to the final. The semifinal victory over Ruch Chorzow came courtesy of the away goals rule after the two sides played to a hard fought 0-0 draw in Szczecin. Pogon Szczecin will face Ekstraklasa side Jagiellonia Bialystok (who have Alexis Normabuena in their ranks- a Chilean with Palestinian roots who was approached about playing for the National Team) in the final on May 22nd. The winner will advance to the UEFA Europa League. If Pogon win, Omar Jarun will be the first Palestinian player to play in continental European competition.
Jagiellonia Bialystok Omar Jarun Pogon Szcezecin Poland Polish Cup Final