June 02, 2010
We express our solidarity with the international activists who fell victim to Israel's high sea piracy and we extend our sympathies to the families of the deceased, we'll never forget them.
While we have been glued to our tvs watching the developments of the situation, our national team has been in Khartoum preparing for the friendly against Sudan on Friday. The match will be played in the Merrikh stadium in Omdurman, the same venue that hosted Egypt and Algeria's famous deciding World Cup Qualifier.
Preparations
Palestine has been holding practices at the Hilal stadium in Omdurman under the eye of a crowd of onlookers and the Sudani press. The team arrived in Sudan early Sunday and as of Wednesday, all players should be in camp except for Ammar Abusleisel who was unable to leave Gaza.
This match is part of Palestine's preparations for the West Asian Games later this year and the 2014 preliminary World Cup qualifiers that start in 2011. Sudan is preparing for their African Cup of Nations qualifying campaign, their first fixture against the Congo this September. 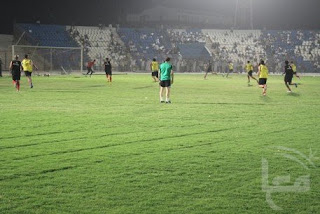 Previous encounter
Palestine and Sudan last met in 2002 in the Pan Arab cup in Kuwait playing out a 2-2 draw. That match could be of little predictive value though as the teams fielded now are pretty different. Contrasted to Nicola Shahwan's heavily Chilean influenced squad of 2002, Palestine's squad in Khartoum is made up fully of West Bank and Arab based players and is headed by French-Algerian manager Mousa Bezaz. As for Sudan, they have opted to field fresher faces, not calling up a number of their more experienced players.
Clash of schools
It should be an interesting match, especially as there is a contrast between the two sides. Geography alone should be an indication. Both play in very different competitive climates, Asia and Africa and the playing styles will reflect that.
Sudan's players are all domestic, coming from a handful of Sudani clubs, most prominently Hilal and Merrikh which have a lot of African exposure in the CAF Champions League. There should be a lot of cohesion within the squad as a result.
Palestine on the other hand have a pretty diverse group playing in the West Bank and other Arab countries top divisions. However lack of cohesion shouldnt be much of a problem as the team has been meeting up regularly throughout the past year and played a number of matches against national teams and clubs.

High Expectations
After the draw against the UAE late last year, it is reasonable to assume that Bezaz is guiding the team on the right path. Furthermore, the restart of the West Bank league two years ago is sure to show a marked improvement on the players and the presence of top players in various positions is encouraging. Therefore, as evidenced by message boards, it is no surprise that Palestine fans are expecting a result. We shouldn't forget that we are the away team and are playing in a climate we aren't used to against a well-established team, but Sudan haven't been in top form lately and with the absence of a number of their veterans, this match should be a contest.