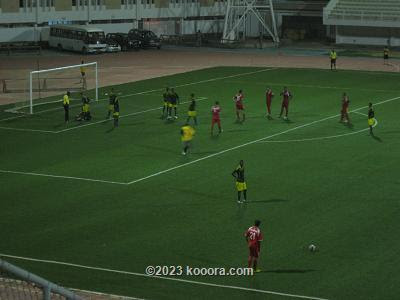 The Palestinian National Team drew with its Mauritanian counterpart in a friendly held on Wednesday evening in the Mauritanian capitol of Nouakchott. The match served as preparation for both teams ahead of African Cup Qualifying and the WAFF Championship.
The first half began tentatively with both teams experiencing some fatigue on the first day of Ramadan. The first 15 minutes passed without a real chance on goal for either side. The hosts got the game going with captain Ahmed Teguedi controlling the midfield and stringing passes to forward Asyada. The numerous chances however, failed to be translated into goals as the Palestinian defence sprung into action and impressed in keeping the Mauritanians out. Luck favored Palestine in the first half as well, with the crossbar coming to Abduallah Saidawi's rescue to stop Asyada's clever chip from going in, in the 31st minute.
Palestine's best chance came from a well struck free kick by Majed Abusidu in the 35th minute. His rasping shot was put out by Mauritanian keeper Suleiman for a corner.
The second half was more of the same with both teams playing with a lone striker and content to just string the ball about in midfield. The draw represents a positive result for Mauritania who lost all their World Cup qualifying games and desperately needed something to build on ahead of their African Cup qualifier against Burkina Faso next month. For Palestine, the string of draws stretches to four after draws against the UAE (1-1), Dynamo Moscow (1-1), and Sudan (1-1). The sluggish display was probably to be expected after six players were refused travel by the Israeli Occupying authority and the fact that many players had only one training session with the team after arriving late on Tuesday night. Mousa Bezaz's men will look to build on this performance next month when they face Yemen and Iraq, knowing that 3 points in their first match against the Yemenites will be absolutely crucial in advancing to the semifinals.
Friendly Mauritania palestine