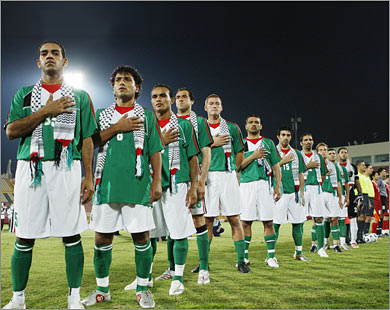 So many questions, so few answers. Moussa Bezaz has never really settled on a favored formation nor has he ever fielded Palestine's strongest squad in his two years in charge. The World Cup qualifying preliminary matches against Afghanistan are no different. Palestine will be without captain Ramzi Saleh, Mohammed Samara, and Imad Zatara due to injury and club commitments, respectively. Promising players from the Olympic side were also not picked, presumably because of the short turnaround between Olympic and World Cup qualifying. In a puzzling move, Bezaz has chosen to leave out an established star in the form of Majed Abusidu whose 19 caps would have made him the fifth most capped player in the present squad- behind Keshkesh (33), Attal (27), Amour (27), and Bishara (25). Abdelatif Bahdari was included in the initial squad but faces a race against time to secure and exit visa and join the National Team before June 29th.
Formation:
Bezaz got Palestine to break an agonizing 59 months without a win by utilizing the 4-2-3-1 formation during the Challenge Cup. Despite its conservative nature it allowed Palestine to control the game and shield the defence effectively. As a result, Palestine conceded only one goal- a penalty- during three games and easily qualified for the 2012 edition of the Challenge Cup. Most the players in this squad are holdovers from that qualifying campaign so the personnel is definitely there to implement a 4-2-3-1.
Bezaz has also tried his luck with a 4-3-3 which would provide a way to shoehorn Alyan, Attal, and Keshkesh into the same line-up. It would be awkward and probably at the expense of burners like Amour, Abu Belal, and Nu'man who provided width and service during CCQ. Also the quality of the midfield, as far as gaining and keeping possession is concerned, is a little questionable.
Another intriguing option, if Bahdari is included in the squad, is playing three at the back. Bahdari, Jarun, and Bishara are all skilled enough on the ball to do it. Palestine has an abundance of wide players in Suleiman Obeid, Ismail Amour, Ashraf Nu'man, Atef Abu Bilal who could provide the width. A 3-5-2 would provide a way for Bezaz to get his best players on the field but don't expect him to do it, partly because a lot of the players are not familiar with it and it would require our wingers to take on added defensive responsibilities.
Who Starts?
Goalkeeper: Abdullah Saidawi who after 11 years with the senior team is finally getting a chance thanks to Ramzi Saleh's injury will be in goal. He has been fantastic this season with Hilal Al-Quds, keeping the most clean sheets (12), and conceding a meager 14 goals in 22 games.
Right Back: Ahmad Harbi will retain his place as the team's right back he can be a little prone to getting caught out of position his attacking instincts are excellent. His Challenge Cup campaign essentially made Shareef Adnan redundant. [UPDATE] Ahmed Harbi has not been allowed to leave the West Bank by Israel, no reason was given. He will be replaced by Hussam Abu Saleh or Samer Hijazi
Centre Back: Omar Jarun will get his third cap and will be partnered by Abdelatif Bahdari, if he can get out of Gaza in time. If not, expect the solid but unspectacular Khaled Mahdi to take his place.
Left Back: Roberto Bishara. This is a problem area for a lot of national teams, Roberto Bishara hasn't played here with Palestino in recent seasons but he is a very intelligent player with underrated attacking ability. Bezaz could opt to play him the middle if Bahdari is absent but I don't see Bezaz having that much faith in Samer Hijazi.
Right Midfield: Ismail Amour. He has competition on his hands but he's the best wide player on the roster with the most experience to boot.
Centre Midfield: Houssam Wadi will be deployed to do the dirty work in midfield, it is who starts next to him that is the big mystery. Khader Yousef will be challenged by two players who weren't in the Challenge Cup squad: Murad Ismail and Ma'ly Kawre'.
Left Midfield: Another question mark, Bezaz will have to choose between Atef Abu Bilal, Ashraf Nu'man, and Suleiman Obeid. Obeid has been deployed more centrally but I've always seen him as a wide player and with the likes of Keshkesh and Attal in the squad he probably won't be played there.
Support Striker: It might, finally, be a question of Keshkesh OR Attal instead of Keshkesh and Attal. This is Palestine's version of the Steven Gerrard/Frank Lampard conundrum. They're basically the same player, except Keshkesh spent his early years toiling as a midfielder. For the past four years these two have been slapped together and it seems like the only time they score (Keshkesh: vs. Jordan, China, FC Brussels Attal: 2006 Challenge Cup, Terek Grozny friendly) is when they're playing alongside a forward that complements them.
Striker: Murad Alyan, three games, four goals. He'll be facing even weaker opposition in the form of Afghanistan so expect him to add to those numbers.