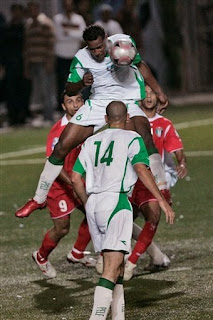 Its official.
Palestine, and formerly Wehdat, defender Abdel-Latif Bahdari has signed a 2 year deal with Hajer. The club, in the Eastern city of Al-Hasa(الاحساء) just got promoted to the Saudi top flight: the Zain Professional League. (For those who dont know, Zain is a major telecom provider in the region.)
This announcement comes after much speculation over where the 27 year old would spend the next year, with Shabab al Khalil laying claim and a Kuwaiti outfit throwing its hat into the ring.
With this signing, Bahdari becomes only the second Palestinian to play in the Saudi League, the first being all time national team top scorer Ziyad Al-Kord, who played for Abha back in 2003.
The Saudi League is one of the top leagues in the region so this is the kind of move we were hoping for. The strength in the Saudi League lies in a handful of clubs which alternate exclusively in title wins from year to year (but hey, its like that pretty much everywhere). Don't expect Bahdari to win any titles with Hajer, but hopefully this will be a stepping stone to a bigger signing, he will just have to prove himself.
Good luck Abdel-Latif, make us proud!
Abdelatif Bahdari