Get to know Hicham Ali 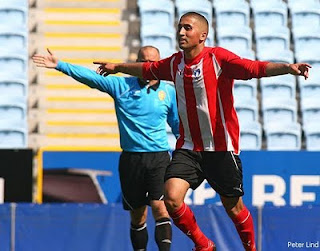 Friend of the blog Amin Ziad, who lives in Sweden, got in touch with Olympic team midfielder Hicham Ali on behalf of Football Palestine. Hicham was a key figure in the Olympic team's London 2012 campaign. His presence in the midfield along with Abdulhamid Abuhabeeb and Ali El Khatib resulted in flowing attacking football, something we are not used to from our national sides. Here is Amin's Q&A (translated from Swedish) with the midfielder who plays in the Swedish Division 1:
FP: Did you ever consider playing international football for Palestine or Sweden before being called up for the Palestinian olympic team?
Hicham Ali: Of course. I've always wanted to play for a national team and especially for my own country.... So when the FA contacted me I said yes with an open heart.

FP: Many fans were suprised when they saw you starting on the bench in the first leg of the Olympic qualifier playoff vs Bahrain and rumor was that you had a disagreement with coach Mokhtar Al-Talili, is there any truth to that?

H.A: You can't call it a disagreement. The coach decides and does whats best for the team, and obviously there was someone better then me.

FP: How do you compare the training you underwent in Palestine to that in Sweden?

H.A: There is a big difference. European football is more tactical.

FP: Which player(s) did you mostly hang out with in between sessions?

H.A: Mustafa Abu Kweik, Nadeem Barghouti, Amr Abu Rwaies and Ahmed Salameh. They are all big players with big hearts, they always supported me.
FP: Has the senior team ever contacted you?

FP: Do you see yourself continuing representing Palestine?

FP: What is your club situation?

H.A: It's good. I have been playing with Rosengård (DIV 1) this season but I have a contract with Malmö FF that runs out in December. But it looks good so i'm hoping for to re-sign with them.
FP: Have you gotten any offers from Swedish clubs?

H.A: Yes, I've gotten offers from a couple clubs, but thats not anything I want to discuss. My goal is to re-sign for MFF.

FP: Have you gotten offers from clubs abroad?

H.A: Yes, a couple of Palestinian clubs and others have contacted me. But it's not anything I want to go deeper into.

FP: What is your dream club?

H.A: You can always dream. My favorite club is Barcelona so you can say that that is what I aspire for.

FP: Lastly, would you like to say a word to Palestinian football fans?

H.A: I just wanna thank everyone that supported us in the games. We hoped to advance past Bahrain so we could have experienced another dream match with the fans. Unfortunately, it didn't turn out that way, so the only thing we can do now is to hope that the senior team advances to the WC.
Hicham Ali Olympic Team