Vociferous support from the crowd will be needed if Palestine are to overcome Thailand.
What: 2nd Round World Cup Qualifier (Return Leg)
When: July 28th 2011
Where: Fasial Al-Husseini International Stadium, Al-Ram, Palestine
Kickoff: 1800 Local, 1500 GMT
Streams: Link1
1st Leg (THA 1 : 0 PLE)- Palestine were clearly second best in Buriram over the weekend but did just enough to frustrate Thailand into settling for an advantage by the slimmest of margins. Palestine sat deep and were overwhelmed in the first half with only a single corner and 1 shot on goal to show for their efforts. Al-Fursan improved in the second half with the introduction of Houssam Wadi and Ali El-Khatib but with Alyan playing as a lone striker failed to put any real pressure on the Thai defence. Thailand won a penalty in the final seconds of the game but saw it sensationally saved by Mohammed Shbair.
Israeli Interference: Israel has refused three members of the National Team contingent entry into the West Bank. Majed Abusidu (Yarmouk/KUW), Mohammed Samara (Arab Contractors/EGY), and coach Hassan Dabdoub have all been stranded in Amman. According to multiple sources in the Palestinian media, Abusidu has gone back to his club whilst Mohammed Samara will wait in Amman in hope that his situation can be resolved.
Referee controversy: South Korean referee Lee Min Hu was met with the ire of many Palestinian players who thought he was too generous with his yellow cards. He didn't do himself any favors when he didn't even caution a Thai player for hacking Houssam Wadi from behind. This time around some in the Thai media are concerned with the appointment of Salah Al-Abasi for the return leg. The controversy stems from Qatar's Banjar Al-Dosari's decisions during the UAE-India qualifier. Some fans are now demanding that Arab referees not officiate matches involving other Arab nations.
Lineup changes: Ahmed Harbi, Khaled Slaem, and (possibly) Abdelhamid Abuhabeeb will be available for this match. With the forced absence of Abusidu it looks like Harbi is set to take his place at Right Back. The bigger question is what Bezaz will do in the middle of the pitch- Wadi might not be healthy enough to take part (thanks to that tackle), Ismail was ineffectual in his 45 minutes and Samara is still in Amman. Khader Yousef- a perennial Bezaz favorite- will most likely start the question is who will start alongside him and how adventurous Bezaz will be as he seeks to overturn a 1-0 deficit.
Potential Starting XI: 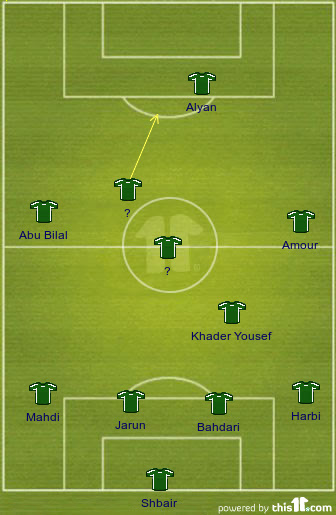