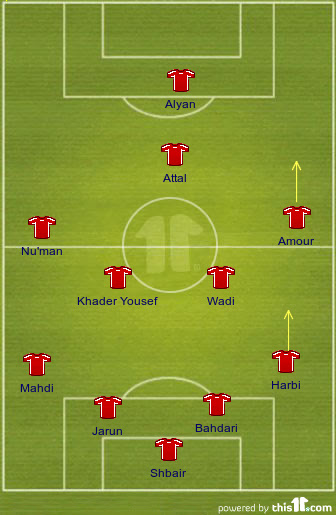 Recap: Can this game be summed up in a couple of paragraphs? Probably not, but I'll do my best. Palestine came out of the gate guns blazing, Alyan sent a ball across the face of goal that Attal nearly tapped in to an open net. Minutes later Alyan would make no mistake slotting home from just inside the box. With the crowd in full voice Palestine went forward looking for a second. Palestine were exposed on the right-flank were the talented, but defensively suspect, Harbi was caught out of position. On the first occasion Bahdari managed to put out the fire, on the second occasion Teerasil Dangda found an open Thongalo who put the ball over the head of Mohammed Shbair.

Palestine's second half was a composed performance but despite carving out several chances they couldn't find a goal until the final minute of regulation. Al-Fursan were perhaps victim of their coach's trepidation who didn't change the formation or instructions at halftime. Bezaz introduced Abugharqud- a forward- midway through the second half but insisted on playing him on the wing. Thailand's equalizer came from a free kick after Harbi hacked down a Thai player who was through on goal. A harsh ending to what was a very spirited performance.

What I liked: I am not going to criticize a single player that was out there today. They all gave their all despite not being able to secure progression to the third round. Murad Alyan deserves extra credit for his incredible record of 7 goals in 7 games all of which have been come in competitive matches. I don't know what to make of the atmosphere or the crowd (Al-Jazeera and PSC didn't have boom mics picking up the audio). I'll let Aboud expand on that in later posts.

What I liked (part II): Check out Grant Wahl's article, there will be another column covering Omar Jarun in an upcoming issue of SI.

What I didn't like: After Thailand equalized for a second time some fans (I counted two or three bottles) threw water bottles onto the pitch. The 12,000 fans in the stadium were classy and positive but it only takes 2-3 boneheads to tarnish our image.

Moussa Bezaz's future: His contract is up at the end of the month (according to reports he signed a two-year deal when he took the job in July 2009). Bezaz hasn't been horrible he deserves credit for stabilizing a ship that was rapidly sinking, he broke a 59 month losing streak and qualified the team for the 2012 Challenge Cup Finals. His cautious style and perceived favoritism however has won him many critics. The fact that Bezaz hasn't really imposed his style and tactics (does he even have tactics?) despite having a stable league and a bigger budget than his predecessors is a tough pill for the fans to swallow. Most fans had set an ultimatum for the Frenchman: 3rd Round or Bust. He has failed and now the ball is in the FA's court. (Bezaz's record in competitive matches: 3-2-3 Overall: 3-6-4)

What's Next: The AFC will announce the host of the 2012 AFC Challenge Cup tomorrow. Palestine is bidding to host the March tournament but faces competition in the form of Nepal and Maldives. On the pitch, Palestine has a home friendly against Tanzania on August 10th.
2014 World Cup AFC World Cup Qualifiers Mousa Bezaz Murad Alyan palestine Thailand