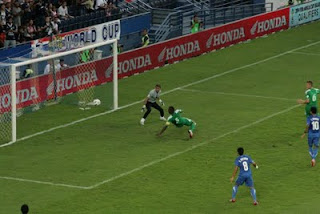 Bahdari sacrificed his body but was unable to stop Thailand from taking a 1-0 lead in the 18th minute
Starting XI (4-5-1): 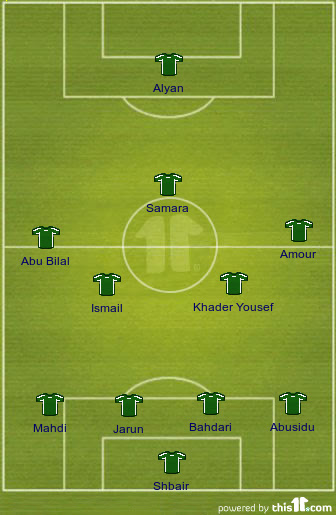 Recap: Bezaz sent out a team that was meant to contain and neutralize Thailand's speedy counter attack. In the first half, the plan by and large failed as Palestine were overrun and lucky to escape trailing only 1-0. The goal coming after Thailand's makeshift right back, Jakkraphan Kaewprom, drifted into the area and struck a shot that deflected past Bahdari and into the net.

The team calmed down in the second half, with Wadi replacing the ineffective and almost invisible Murad Ismail. Ali El-Khatib got his first cap in place of Mohammed Samara and was more creative and more threatening from the set piece. Palestine's perseverance saw them go close through on of El-Khatib's crosses (a chance he created after less than 30 seconds on the pitch), an El-Khatib free kick, and an El-Khatib corner that Alyan nearly put in.
Palestine's hard work was nearly wasted as Captain Abdelatif Bahdari gave up a penalty in the last minute of normal time. Mohammed Shbair who had made save after save was called to make one more. He duly delivered diving to his right [EDIT: Not sure if Shbair saved it or if it went off the post] and preserving a manageable result for the return leg in Al-Ram on Thursday.
What I liked: Palestine regrouped in the second half and actually looked like a side with some sort of game plan. Omar Jarun and Abdelatif Bahdari were solid if unspectacular and helped cut out numerous Thai attacks. 1-0 is an acceptable away result and with that penalty save you would have to give the mental edge to Palestine.
What I didn't like: Palestine came out flat and nervous to start had they maintained their composure they might have been able to eek out a 0-0 draw. The officiating as is almost always the case in Asian matches was very, very poor. Tactically speaking, Palestine depends on width to get service into Alyan- there was precious little of that during this game.
Thailand Consensus: Schaefer has done well to sort out the kinks in Thailand, they are still very poor finishers though. The War Elephants wasted chances aplenty and missed an opportunity to go 2-0 up from the spot. I feel like the more time Schaefer spends with this team the better they will be but he can't change the culture and mentality of the team in one month. The German manager will have his work cut out for him as Thailand have a horrendously poor record in West Asia and missed a chance to put away the game in the first leg.

What's Next: Palestine will face Thailand on Thursday in Al-Ram (7/28) they will need a win (by two goals) to progress.