July 22, 2011
I crossed over to the West Bank yesterday ahead of next weeks clash with Thailand in AlRam. First I'm spending time with family in Tulkarem. The day started pleasantly enough with a trip to a nearby hilltop in Bal'a with picturesque views of surrounding towns. It was also a welcome escape from the humidity down below. From up there, we could see Nablus to the South, and the Mediterranean to the East. I spent the afternoon with my cousin who is a Thaqafi supporter. We drove around Tulkarem and he treated me to the best Knafa I've ever tasted at a sweet shop called AlMasa. Of course, football was the subject of a decent portion of our discussions. It was most insightful especially because he has followed the league from the inside for as long as he can remember. We visited Thaqafi FC afterwards then proceeded to the Municipality football pitch(main football ground in Tulkarem) where we found his rival team Markaz Tulkarem practicing. I sympathize with Markaz for their relatively poor background and they happen to be the team my father supported growing up. They were in the middle of a scrimmage and we sat and watched the team from the refugee camp kick the ball around. 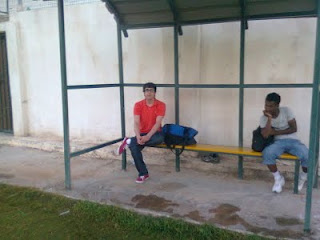 Former international Fadi Saleem was on the pitch as was Olympic midfielder Thaer AlBana. I waited for a break in the play to have the gentleman sitting next to me call Fadi Saleem over for a brief introduction. We exchanged niceties and I praised his past contributions to the national team midfield and of course, we took a picture.. 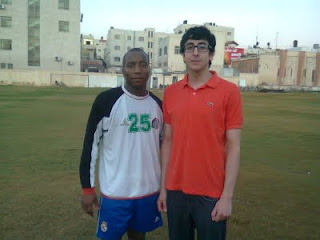 Fadi is very humble and the rest of the players applauded clearly amused at his celebrity moment. Of course Markaz has produced another nationally reconizable face in Olympic star Khaled Salem.

This is my first visit to Palestine in 6 years or so and I am able to look at it with more mature eyes now. The experience at the Jordan border and the drive through the West Bank hills gave me quite a feel for the military occupation. I'll save my political insights for other outlets. I did get an idea as to what our national team represents. It unites these cities, towns and refugee camps spread across the occupied territories as it draws players from them. Not only that, but the diaspora is also represented in the squad lineup. In that sense, it truly unites Palestinians inside and outside Palestine.

We are set for an exciting week, be sure to check out Paul's guest article below on Thailand...