The search for a new NT manager continues...

August 09, 2011
After Moussa Bezaz's contract was not renewed by the PFA last week it was assumed that a candidate was in place. It is becoming abundantly clear that that is not the case and the abrupt cancellation of an August 7th friendly against Estonia and an August 10th friendly against Tanzania. Time is of the essence and the FA needs to ensure that a new manager is in place by the end of the month to that friendlies are organized on FIFA dates in September and October.

1. A Gameplan: One of the most glaring deficiencies with the previous regime was a complete lack of planning. Squads lacked balance, the manager didn't settle on a shape until the final 4 months of his tenure, there were no set piece plays, and you could forget about tactics. This lack of planning was glaringly evident during the return leg of the Thailand match- Palestine grabbed and early equalizer but some of the players were unaware of what they should be doing, should they press on for a second? Sit back and defend? That lack of preparation is unacceptable. Palestine needs a manager with a vision and a plan for its players to fit a formation and style. The reality of Asian football is that a well-drilled side can compete and succeed- Just look at the success Jordan has had in the past decade.

2. Poise: One of the worst things about Bezaz was his staunch refusal to take any blame for the team's failures. Bezaz has blamed the referee, the occupation, the weather, fatigue, and most puzzlingly- the fact that league play ended in mid-May. Palestine need a manager who can lift the team and instill confidence in them. Bezaz was too lassiez-faire, too reactionary. The argument over the captaincy between Abdullah Saidawi and Ahmed Keshkesh is the perfect example. National Team managers decide on a captain and a vice-captain early and in the absence of Ramzi Saleh there needed to be a conversation behind closed doors were this deal could be hammered out.

3. Scouting: Whomever is chosen to fill the post there needs to realize that being a national team manager is a full-time job. Bezaz would go back to France for months at a time and just show up in Palestine for training camps. The new national team manager has to spend time traveling to the Gulf, Europe, and Latin America to court new talent. At the same time he has to spend time in Palestine and keep his finger on the pulse of the league. When he's not in the country he should delegate this duty to an assistant coach and this shouldn't be limited to the West Bank. Although the league in Gaza is a lot less established the talent of its top players is undeniable.

1. Hossam Hassan: [UPDATE:Hassan will be taking over at Ismaily, so he is out of the running] An Egyptian footballing legend with 169 caps and 69 goals over a sparkling 20-year career with Egypt. He is the only manager whose name has been floated around by the media. As far as his managerial career is concerned he is relatively inexperienced having been in charge of Zamalek for a mere 18 months. Before that he had brief stints with Al-Masry, whom he saved from relegation in 2007/08. He resigned the next season but not before receiving a 6-match ban and a 50,ooo EGP fine. Hassan took over the helm at Egyptian Telecom later on in the 2008/09 season and nearly kept them up. He jumped to Zamalek midway through the following season and in 12 games took the team from 14th to 2nd, winning 31 out of a possible 36 points. Zamalek were in first before the league (9W 5D 1L) was postponed due to the revolution. After the league resumed the spark wasn't there and Zamalek endured a winless streak in the final weeks of the season that allowed El-Ahly to move past them and into first place. Hassan is insanely passionate and is a proven winner but has yet to really prove himself as a manger. That said, he would still be an upgrade over Mousa Bezaz whose only top-flight job before joining us was as a caretaker at AS Nancy in 2002. 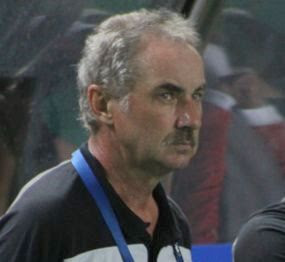 2. Alfred Riedl: FA President Jibril Rajoub has stated that he wants to appoint a manager who is aware of the challenges facing Palestinian football. Then why not get a manager who has coached us before? Riedl has previously coached Austria, Liechtenstein, Vietnam (thrice), Palestine, Laos, and Indonesia. He came close to guiding Vietnam to the AFC Asian Cup finals in 2000 and 2004 (recording a famous 1-0 win against South Korea during 2004 qualifying). Vietnam brought Riedl back to the fold when they were set to co-host the Asian Cup in 2007. Riedl led Vietnam past the group stage (beating UAE, drawing Qatar) only to lose to eventual champions Iraq 2-0. In his three stints in charge of Vietnam Riedl had a record of 25W 10D 16L. His time with Laos was brief before jumping ship to take over the Indonesia post. Riedl did have an impressive record in competitive matches (6W 0D 1L) his overall record is an impressive (10W 0D 2L). He was let go ahead of the World Cup qualifying clash against Turkmenistan but the team that advanced to the third round had his fingerprints all over it. With Palestine he is best known for engineering the 8-0 hammering of Chinese Taipei and the 1-1 draw against Iraq that sent Palestine to top of their 2006 World Cup qualifying.

3. Someone else: Let's be real here who could have guessed Mousa Bezaz would get the job in July 2009? Most managerial appointments in the Middle East have a touch of random chance about them. Carlos Quieroz in Iran? Zico in talks to coach Iraq? Bob Bradley potentially taking over Egypt? We might not get a big name but we will probably get an appointment that nobody expected. In fact, I would say that odds are that is what's going to happen. Until then it's a lot of speculation- and the coaching carrousel is in full swing: Wolfgang Sidka did not have his contract renewed with Iraq, Milovan Rajevac was fired from his post as a coach of Qatar, and Saudi Arabia have probably fired a dozen managers since I started writing this post...