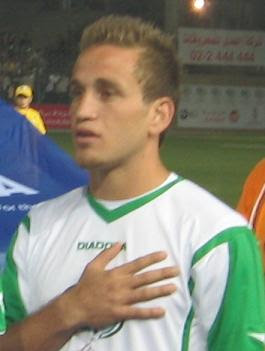 1. Fahed Attal (Shabab Al-Khaleel)
Former Clubs: Al-Jazira (JOR/2006-2010), Wehdat (JOR/2010-2011)
After a five year stint in Jordan, an older more experienced Fahed Attal is back in Palestine. A lot was expected of Attal when he burst onto the scene in 2006 with the national team scoring 12 goals. The goals with the national team have dried up although he has shown a knack for creating chances for others.
While in Jordan, Attal was a 10 goal a season striker. Fans will expect him to better that number in a stacked Shabab Al-Khaleel squad. He will also have a capable partner in Eyad Abugharqud who scored a whopping 20 goals in 22 games with Al-Am'ary last season.

2. Ahmed Keshkesh (Al-Am'ary)
Former Clubs: Wehdat (JOR/2009-2011), Shabab Al-Ordon (JOR/2009), Al-Am'ary (2008)
Keshkesh makes his return to Al-Am'ary after a two year period where he scored in every single competition for Wehdat. He will forever be remembered for his clutch performances in the team scoring in the 2009 Supercup, 2010 FA Cup, and 2011 FA Cup finals.
His move to Al-Am'ary coincides with the departure of Eyad Abugharqud to Shabab Al-Khaleel. So it will fall on Keshkesh's shoulders to replace the 20 league goals Abugharqud scored. Keshkesh scored 14 in 21 games in his previous season with Al-Am'ary.

3. Amir Abu Arar (Shabab Al-Dhahrieh)
Former Clubs: Hapoel Umm El-Fahm, Maccabi Be'er Sheeva (ISR/2007-08), Hakoah Ramat Gan (ISR/2008-09), Bnei Sakhnin (ISR/2009), Ironi Umm El-Fahm (ISR/2009-10), Hapoel Nazareth (ISR/2010-11), Hapoel Kfar Saba (2011)
A journeyman by all accounts who spent the past four seasons on loan at six different clubs in the Premier League and first division. An unknown quantity that just could be the next Murad Alyan. He's 26 so his best football is in front of him and he'll have the perfect complement in strike partner Khaled Salem.

4. Jehad Rabie (Shabab Al-Khaleel)
Former Clubs: Maccabi Kafr Kanna, Bnei Tayibe
Will be given the opportunity to sort out Shabab Al-Khaleel's defensive troubles alongside former Hilal Al-Quds defender Mohammed Abdel-Jawad. From a national team standpoint the depth chart at this position is undetermined. Bahdari and Jarun are surefire starters but club commitments might keep them out of the Challenge Cup. If Rabie can come in and have a dominant first half of the season he might find himself part of the national team set-up

5. Walid Abbas (Shabab Al-Khaleel)
Former Clubs: Hapoel Umm Al-Fahm
Another footballer with vast experience in Israel predominantly with Hapoel Umm Al-Fahm. Current Shabab Al-Khaleel manager Sameer Issa coached him when he was with Umm Al-Fahm and fought to bring him to the West Bank. He's a Palestinian left-back so a lot of eyes will be on him to see how he will fit into this newly formed Shabab Al-Khaleel squad. If he proves to be a success he'll have every opportunity to stake a claim in the national team under a new coach.
West Bank Premier League