Get to know Mohammed Shatrit

September 18, 2011
Friend of the blog, and creator of the very well maintained 'Palestine national football team' Facebook page Amin Ziad got in touch with Palestine and FC Issy forward Mohammed Shatrit. France-based Shatrit, who was part of the AFC Challenge Cup qualification squad, details his experience with the National Team and the WBPL's Shabab Al-Khalil. Here is the text..

Football Palestine: Tell us Palestinian football fans out there a little bit about yourself and your football career..

Mohammed Shatrit: I'm 28 years old. I'm from Halhoul just close to the city of Khalil (Hebron). All my family is in Palestine. in 2006 I signed professional contract in Liga 1 in Tunisia. It was a very good experience. But I came back to France after that for a French team in liga 3 but I got injured few months after. Unlucky. But when I recovered I found another challenge with a team JA Drancy in 2007 till December 2010. We finished champions in 2008 and in 2009. I finished top scorer in 2008 with 21 goals in 27 games. I started in liga 6 with the team (JA Drancy) and I left them in liga 3. In 2011 I came to Shabab al Khalil. But I didnt play very well. I agree.

FP: Did you ever consider playing international football before? How were you approached to represent Palestine internationally?

MS: I was at work and a colleague told me that the Palestinian national football team would be in Belgium. So I took the train from Paris to Brussels the day after with my training clothes. I told the former coach Ezzat Hamza that I was a football player and Palestinian. He was very nice with me. He told me ok no problem change your clothes and come on the pitch. I would like to thank him and Moussa Bezaz too.

FP: When you scored your first goal for Palestine vs Dynamo Moscow, how did it feel?

FP: Who/which of the national team players did you get most closely acquainted with?

MS: All are my friend and more they are like brothers. I was very close to Abdallah Sidawi i really love him and Shbair, Al Amour, Eyad Abu Gargoud, Bahdari, Jarun, Said abu Salim, Khader Youssef and all of them.

FP: In your brief time with the NT, what were the negatives and the positives you experienced?

MS: Negative things are that I didn't play any minutes in Myanmar for Challenge Cup qualification but all the rest was very positive and wonderful. Wallah i enjoyed to come everytime.

FP: What did you think of the teams performance in the Challenge Cup Qualifiers?

MS: Very good, we qualified and that was what we came for. And now our FIFA ranking is better too.

FP: How do you see your chances to represent Palestine in the future?

MS: I think that they won't call me back. I'm sad but if anybody gives me chance I will be very happy and proud to play my best football.

FP: How was your relationship with former French-Algerian coach Mousa Bezaz? And how was he as a coach?

MS: At the beginning it was very good and he gave me chance to play. I would like to thank him. But after I was less good after my foot injury. I started to get less playing time. But hamdulila now I'm better. And Bezaz was a very good coach he tried to make us as professional as possible and thanks to him we improved.

FP: When you came to the WBPL and Shabab Al-Khalil from France, many fans had high expectations from you.. but you only scored 1 goal that season. What is your comment on that?

MS: I agree I scored only 1 goal but look I didn't play too much in attack because we needed players in midfield. And I was not very happy because Shabab Al-Khalil lied to me. They didn't give me my salaries. And they were not professional. It was better with coach Samir Issa. We didn't get a very good team when I came. But me too I was not on the top during my short experience. But my head was never quiet.. I always had to think about how to pay things in Paris and help my family. It was difficult but I would like to thank very much all the fans. They were good with me. So, I didn't score because I often played in midfield.

FP: What is your club situation?

FP: Are you planning to come back to the Palestinian league?

MS: I don't know, why not. But next time I'll be more careful.

FP: What is your dream club, the club that you aspire to play for some day?

MS: Where destiny drives me!

FP: Lastly, would you like to say a word to Palestinian football fans?

MS: Thank you very much for supporting our national teams. And I would like to thank Mr. Jibril Rajoub for hosting me like a brother. I hope to play again for Palestine and Inchallah god Will give us better days. 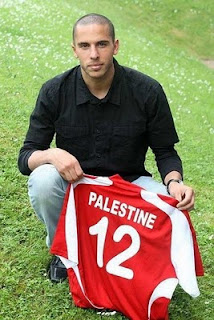