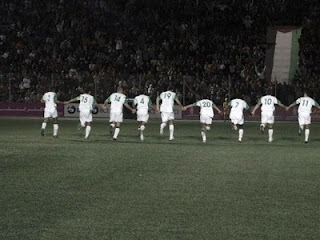 The Palestinian Authority is at the UN filing for full membership as rallies and demonstrations are being held in the West Bank. As I mentioned on twitter (just plugging @FutbolPalestine,follow us!), I believe our FIFA membership does us more good than any upgrade at the UN will at this point. But, though I am convinced the PA move is a political charade, I am compelled to follow the events on the ground and at the UN. We've been hearing the term 'state-building' a lot and the PFA is no exception to this process. Every home match is touted as a political achievement. So maybe it is not a coincidence I decide to post about Palestine home support on this "historic" day. As demonstrated in the past few days and years, we are a people accustomed to rallying so it should come real easy getting a football crowd organized, or so you would think. First I'll explore the effect of home-field advantage, then talk about the role Palestine supporters play, or should play, in making it a reality.
To what extent does home-field advantage exist?
We use the term home-field advantage quite often when talking football and sports in general. What the term refers to is a collection of factors that vaguely come together to possibly favor the home team over the visiting opponent. These factors are quite pronounced in Asia.
The AFC is geographically the vastest confederation and traveling teams often have to make one or more stops on their way to destinations. Travel fatigue is therefore a very real threat to 'away' teams. And as diverse Asia is in its cultures, it is diverse in its climates so traveling teams may very well find themselves playing in conditions they are not used to. 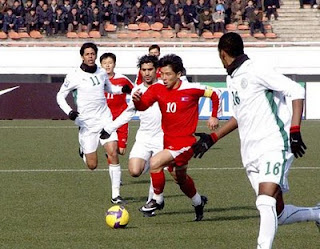 Far from Riyadh, Saudi players endure the Pyongyang winter in a World Cup 2010 Qualifier
Another important factor is, of course, the home fans. Whether they motivate their countrymen to give their best on the field, or influence the referee to give decisions in favor of the home team, they have such an effect on the state of play that they are often dubbed the twelfth man.

All of this is theoretical and there is a debate on the effectiveness of home-field advantage with quite a few interesting studies out there. Lets make our own little study here looking at the last two matchdays of AFC 2014 World Cup Qualifiers. Of course we will need a lot more than just two matchdays to more accurately assess things and surely enough there are studies that analyze seasons worth of data. But sometimes its nice to keep things simple, right?
To analyze how home teams perform, I've split the results for home teams into two categories:
Using these definitions, we'll find that 14 of the 20 matches result favorably for the home side (70%). This should convince us fairly enough that the 'homefield' is effective in Asia. Palestine would therefore be wise to make the most of it.

Of the three international matches played at the Faisal Husseini, Palestine's senior side drew them all (hey at least we're undefeated!). Only being allowed to play at home in 2008, we Palestinians should know and appreciate its value. Of the factors mentioned above, we can't control the climate, nor can we control the visiting team's journey, but we can control fan support. It is on this note I would like to turn focus on our supposed twelfth man.

The problem with support at the Faisal Husseini

In the first match played at the Faisal Husseini against Jordan I was impressed by the support from the stands which was loud and energetic. The same goes for the support at the Olympic team's qualifiers earlier this year. However from behind my TV screen I couldn't help but feel the crowd wasn't doing what it was supposed to do at times and there were more than a few forum posts lamenting the lack of a "support culture" among the fans. I didn't fully understand what this meant until I went to the Faisal Husseini myself last July for a World Cup Qualifier. I don't remember hearing the whole stadium chant in unison at any point. Transportation and ticketing might have a lot to do with it. Many fans get to the stadium in private buses from their respective cities. The buses are organized by club supporter groups and what ends up happening as the large groups arrive one after the other is that the different sections fill up with supporters of particular clubs. If you want mass chanting, this seating doesn't help as you'd notice different sections each doing their own thing with fans cheering as they would for their club, but throwing in 'Falasteen', rather than their club name, every now and then.

You can't blame them, Palestine only started playing at home three years ago. For most of their lives, the only 'home' teams most of these fans knew were their club teams therefore it is no surprise there is a lack of unified 'support culture' for the national team. This could change with time as more home matches are played and a more organized 'National Team supporter club' is developed.

What about Dora?
Sitting in the main stand, I noticed the section to the right of me was the loudest and it was populated by Dhahrieh (a suburb of Al-Khalil) supporters. The supporters from Al-Khalil and its suburbs are passionate and plentiful, which makes sense as it is the most populated region in the West Bank. The Al-Khalil derby, played at Dora International Stadium, between Shabab Al-Khalil and Dhahrieh always records the biggest turnouts in the league. 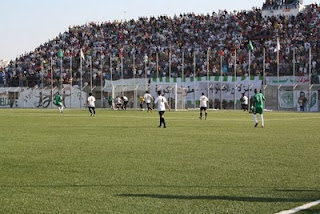 The Al-Khalil derby last friday ended 1-0 for Shabab - Always impressive crowd support from both sides
It would therefore seem to be a fine idea to host international matches in Dora as it would guarantee a full house, and thus, maximum home support. But a couple of points might favor the Faisal Husseini over Dora at the end of the day...

1. Location
The Faisal Husseini is near Ramallah and just outside Jerusalem. Ramallah is already accustomed to receiving international visitors so from a logistical point of view, it more convenient to host international teams there. Compared to Al-Khalil, it also acts as more of a middle ground for supporters from other cities. In addition to being convenient, the Faisal Husseini's location is also symbolic. For political purposes the PFA considers it to be in Jerusalem and thus would prefer to host the National Team's matches there, especially the big ones.

2. Diversity of fan support
This builds on the location point. Lets be realistic, if a match is hosted in Dora, 90% of the people in the stands will be from the surrounding area. Shabab Al-Khalil and Dhahrieh fans will be the majority and I am sure this would create an amazing atmosphere, but it won't be good for developing that 'unified support culture' talked about above. If we do end up with a support culture coming out of Dora, it will have a distinct Al-Khalil character..which might not be a bad thing come to think of it. But I prefer the diversity in the Faisal Husseini stands.

It is safe to assume the PFA won't abandon the Faisal Husseini in favor of Dora and that's probably for the better. But it wouldn't hurt to host a few international matches in Dora, we could very well be impressed by the results.
Faisal Husseini Stadium Supporters