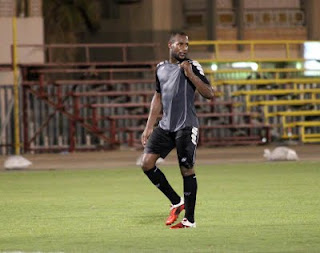 Abdel-Latif Bahdari is one of the several success stories Palestinian football has seen in the past few years. From modest beginnings with Khadmat Rafah in Gaza, his breakthrough came in a loan move to Hilal Areeha(Jericho). The center back was subsequently called up that summer to partner Saeb Jendeya in the 2008 WAFF Championship in Iran where despite his rawness and inexperience, he demonstrated a smart sense of positioning and the potential to become a fixture in the national team back-line, especially given his height and strength. His emergence couldn't have come at a better time as veteran captain Jendeya was preparing to hang his international boots (surely enough Jendeya was later forced into premature retirement due to Israeli travel restrictions).
After a very brief loan to Shabab Al-Am'ary, he transferred to Jordan giants Wehdat in 2009 and spent a fruitful two years there. As his contract was coming to a close, there was much speculation as to where he would go next.

He was linked with a Kuwaiti club and Shabab al-Khaleel when the surprise announcement came that he signed a 2 year contract (~$280,000) with newly promoted Hajer in the Saudi top division. He is one of the four foreigners the club signed to bolster its ranks as it returned to the top flight for the first time in 13 years. At first there was a little scare as to whether he was going to actually join his new team as visa requirements and family issues were cited and it was even claimed Egyptian clubs were trying to woo him away. Whatever happened, he made the trip to Al-Ahsaa' in the East of the Kingdom and started preparing for the new season.

If forum posts are anything to go by, he has so far impressed his new fans. He even grabbed a goal in a friendly against fellow East-coasters Qadissiya. The Saudi Zain Professional League 2011/12 season started yesterday and Hajer play their first game tonight (17:30 GMT) against defending champs Hilal FC. The opponent from the capital Riyadh is the most cash-infused club in the league thanks to backing of princes and lucrative sponsorship deals and consequently boasts the biggest signings. Their offense has the likes of young Moroccan international Yousef Al-Arabi, Korea's Yoo-Byung Soo and Cameroonian Achille Emana. Bahdari and Hajer couldn't have asked for a tougher test in their opening game which they will play in front of home fans.

Playing in one of the strongest leagues in the region, Bahdari is the Palestine player to watch this season. We will be keeping a close eye on his Saudi adventure throughout as he and his club set out to prove themselves.
Hajer vs Al-Hilal
Zain Saudi Professional League
Saudi Sports 2 (streams TBA) 17:30 GMT
Abdelatif Bahdari