As Aboud highlighted in an earlier post- there is a lot to like about Jamal Mahmoud's appointment as National Team Manager. Two 1-1 draws against South Africa's AmaBinnePlaas had plenty of positives but also emphasized room for improvement. Mahmoud's next act as manager will be to lead the Olympic team against the Lega Pro Select team on November 23rd in Italy.
Strength of Opposition
Perhaps the most talked about aspect of the friendlies against South Africa was the fact that the SAFA had not sent the first squad. Instead they sent their developmental side which many fans saw as a slight against the National Team. It is important to note, however that the side they sent was a strong and competent one- the scorer of the goal in the Dora game- Bheki Shabango plays in the ASABA Premiership for Engen Santos. The goalkeepers Ronwen Williams and Brilliant Khuzwayo in both matches have experience with U20 and Olympic teams, respectively. The initial list of players published for the games (for the cancelled fixtures in September) included seven ASABA Premiership players, three first division players, four youth teamers, and five players who were out of contract. Not a world beating squad by any means but certainly not a poor squad either. It was evident that the team the SAFA sent wanted to compete and win and as a result both games did not feel like friendlies.
Overall, Palestine was the stronger of the two teams in both legs and the fact that they did not win either game shows that there is work to be done. The positive thing is that the result against Iran is now dead and buried and the team and coaching staff can start anew.
Leadership & Awareness
Realizing that his captain and starting goalkeeper was available due to the suspension of Egyptian League play Mahmoud moved quickly to call up Ramzi Saleh. This is exactly the kind of leadership that is needed at the helm. Under Moussa Bezaz, it was like some players based abroad simply didn't exist. Omar Jarun wasn't called up until 18 months into the Frenchman's tenure, Roberto Bishara saw the pitch twice under his reign, and Mohammed Samara played a whopping 60 minutes. This shows that Mahmoud knows who his important players are and how serious he is in building a strong team that can win the Challenge Cup in March.
Shape and Formations
Mahmoud's side in the Dora game came out in a 4-2-3-1 formation but one that looked awfully like a 3-5-2 when the team had the ball. Harbi pushed up as he normally does and Fares playing on the left was asked to tuck in as the defence shifted to account for Harbi's position. Amour made constant forays forward, essentially becoming a support striker to Murad Alyan (see below). 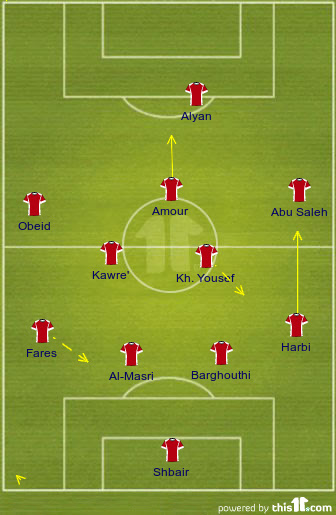 Palestine vs. South Africa (Dora:11/11/11)
The personnel and formation were tweaked in the second game. Palestine played a narrower 4-2-3-1 depending on the overlapping runs of Fares and Abu Saleh for width. Ashraf Nu'man and Atef Abu Bilal strutted their stuff for the first 45 minutes but failed in their primary task- getting service to Keshkesh. For his part, Keshkesh wasn't making the diagonal runs Alyan is known for in search of that service. Obeid, positioned in the heart of the attack, struggled and Palestine opted for a more direct approach down the wings as result (see below). 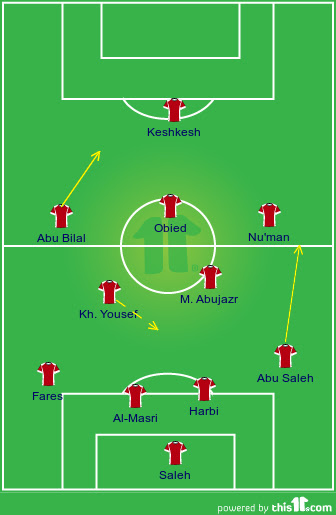 Palestine vs. South Africa (Nablus: 15/11/11)
Experiments
Perhaps the most surprising element over the two matches was seeing Ahmed Harbi deployed as centreback (in the Nablus game). Not known for his defensive prowess as a right-back and having started his professional career inside the Green Line as a winger, Harbi seems more comfortable further up the pitch. The Al-Am'ary man was adept at bringing the ball out of defence but his lack of experience showed when he erred in the second half giving a South African player a clear path to goal; If not for a world class save from Ramzi Saleh the AmaBinnePlaas would have take a 2-1 lead. Unless Palestine are suddenly bereft of centrebacks (Jarun, Bahdari, Al-Masri, Dheeb, Mahdi, Barghouthi, Rabie, and Abu Kweik would have to be ahead of him in the pecking order) I can't see Harbi being played in this position again.
The more promising development was seeing Raed Fares put in a solid 180 minutes at left back. The position has been a problem area for Palestine since the retirement of Francisco Alam. With Roberto Bishara's intermittent availability it was crucial that a suitable replacement be found. Fares is a right back with Hilal Al-Quds so it will be interesting to see if the left back- Ehab Abujazr gets the call sometime in the future.
In the Dora game, we got to see Amour played further up the pitch supporting Murad Alyan. It gave the supremely talented Gazan an opportunity to make his presence felt and he did not disappoint- scoring a goal in the 9th minute. His ability to influence a game is far greater than that of his club teammate, Suleiman Obeid, who is guilty of drifting in and out of matches.
Keshkesh was played as a lone striker in the game in Nablus. Despite his second half goal you would have to say that he was far from his normal self. Palestine looked far more dangerous when Khaled Salem came on in his place. Keshkesh is more of a withdrawn striker and my guess is that he will be allowed to play behind Murad Alyan at some point in the future.
The Jury is still out on...
The holding midfield. In general Khader Yousef, Ma'ly Kawre', Ismail Qasem, and Musa Abujazr did well in shielding the defence. Going forward they needed to be better and quicker in their decision making. Khader Youssef is supposed to be the focal point in this formation, he gets the team moving from defence to attack. Mahmoud's instructions have him better positioned on the pitch and he is no longer shirking his defensive duties. That said, he still needs to work on timing and releasing the ball if this team is to emulate the counterattacking success Jordan has enjoyed in recent months.
Palestine's exuberance often leads to early goals and is great to watch but it can be exploited by smarter opposition. The statistics will show that Palestine played the ball into the box numerous times and got into the attacking third with regularity. That said they seem to lack patience around the box favoring a shot or ill-advised cross instead of an extra couple of passes.
Hopefully, the problems are solved before the Pan-Arab Games in December and the Challenge Cup in March.
Jamal Mahmoud