Catching Up with Omar Jarun 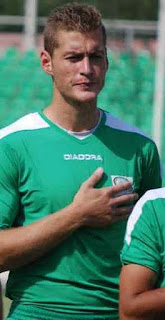 We last spoke with Omar back in February of 2009 when he was just leaving North American football to join Flota Swinoujscie in Poland. Since then, he joined Arka Gdynia in the Polish I Liga and has established his place as Center Back in the National Team after being called up for the 2014 World Cup Qualifying campaign. We sent him a few questions to catch up and get to know him more..he gave us some fun facts, talked about his career and left us with his impressions on Mousa Bezaz. Here is the text:

Quick hits:
Favorite Palestinian Dish? Mulukhia
The National Team Jersey- do you prefer the Green ones or the Red ones? Green
Shawerma or Falafel? Shawerma
Toughest player to defend in training? Keshkesh
Fastest player in the National Team? Amour
Your national team roommate Fahed Attal
A sport other than soccer American Football
Favorite pro sports teams Dallas Cowboys (NFL)
If you weren't playing soccer professionally what would you be doing for a living? Working construction with my dads company, APEC.

Your first match with the national team(against Singapore in 2007) was in a near-empty stadium in Qatar. This time around, Palestine played its first World Cup Qualifiers at home. What was it like playing in the Faisal Husseini?

However short it was, you took part in our 2014 World Cup qualifying campaign from start to finish..including trips to Tajikistan and Bangkok. Any interesting stories?

The first morning in Tajikistan was pretty interesting. I was jet lagged so I woke up around 6:15. I went outside in the front of the hotel. It looked real cloudy you know like smoky or foggy. I asked the hotel reception, "Pretty foggy morning huh?" He said, " it's the smoke from bombs going off during the night from Afghanistan."

You and Abdel-Latif Bahdari are, for us and many, the first choice Centre-Back partnership..can you tell us a little about the relationship on and off the pitch?

Bahdari is a great player. He's confident on the ball and shows great leadership on the pitch. We have formed a good partnership in the center of defense. Communication between us is very good. When we play together, I feel the opponent has a difficult time breaking us down. 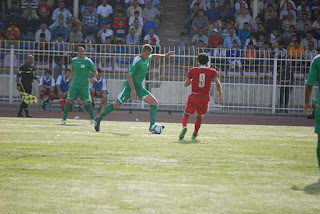 Clearing the ball in Palestine's 2-0 win over Afghanistan in Tursonzoda, Tajikistan


You've joined your third Polish Club- Arka Gdynia this past summer after a brief stint with FC Tampa Bay. How did that move come about? Were there any other offers on the table?

I reached an agreement with FC Tampa bay to part ways. It was handled in a professional manner by the Tampa bay front office and my manager Justin Stone. My old coach from my first club Flota got appointed the job at Arka Gdynia after Arka was relegated to the first league. He contacted me and was thrilled that I recently had become a free agent. I came over to Poland between the Afghanistan and Thailand matches. He wanted to make sure I was in good fitness. And I saw how professional Arka was so it was a no brainer to sign here.

Could you take us through the process of receiving a call-up to the national team? What steps does the PFA take to coordinate with your club?
Coach Mousa would email me and ask how I was doing and invite me to join the team. He wanted to know my clubs schedule. Mousa would then inform the federation, who would send an official letter to my club by fax. There was never any problems with the PFA contacting my club.

In action in the home leg vs. Thailand in Palestine
You had to wait three years to get your second cap with the national team- it must have been frustrating as there were reports you trained with Jordan...what do you think caused the coaching staff to overlook you?

Of course I was frustrated. I had no idea what was going on with the Palestinian National team. Osama, the team manager for Jordan, contacted me by phone and said it was possible to join Jordan. He claimed since I had not played in 3 years, there was a FIFA ruling that allowed me to switch national teams. They flew me to Amman the next week for 3 practices and they loved what they saw. The Iraqi coach, I forget his name, said Jordan and Palestine would work out this situation and I would be joining Jordan in the Asia cup.
Well it turned out to be a big mess. The PFA all of a sudden wanted me back in the team. Looking back I'm glad I did it because it made the PFA aware that I'm a good football player and here we are today.

With the winter break now upon us in Poland's Liga I. Will you be available to play in the Pan-Arab Games in December and the Challenge Cup in March? Have you had any contact with the new manager Jamal Mahmoud?

I am always available to join the national team when games correspond with official FIFA dates. Coach Nasser, who was the intern coach I guess before they appointed Coach Mahmoud, asked me to join the team in Qatar for the Pan-Arab games. I was thrilled. 2 days ago Awni, palestine team manager, informed me the coach does not want international based players for the Pan-Arab games. He is going to wait until the challenge cup. So it looks like I will be in Atlanta for the December break.
And no, I have not been in personal contact with coach Mahmoud.

He and Nourdine were great for the Palestine national team. Training was very similar to what we do in Europe. They required all players to be fit and work hard day in and day out. I loved it.
Coach Mousa had a very strong personality and many people in the PFA did not like it. He was not a so called "yes" man. He knew what was right and what needed to be done in order for us to succeed. Coach Mousa spoke very highly to me about the football president Jabril. He told me how committed he was. Coach Mousa said that it was the other people around him, the political characters, who really don't have a clue about football were the ones causing problems all the time.
I can't say enough about how much Mousa transformed the national team. He made it professional. The difference was night and day from 3 years ago. I only pray that the PFA don't take steps backwards. We have made progress, huge steps, and we need to continue that.
Abdelatif Bahdari AFC World Cup Qualifiers Afghanistan Mousa Bezaz Omar Jarun