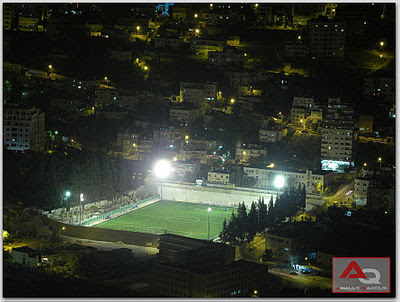 International Football comes to Nablus
What: Unofficial Friendly
Where: Municipal Stadium, Nablus, Palestine
Kickoff: 1500 (Local)
TV: Palestine Satellite Channel
Stream: ?
Previous Encounters:
11/11/2011: Palestine 1:1 South Africa (developmental)
NT in Nablus
Many Neopolitans will get to see their national team in the flesh for the first time when Palestine takes on South Africa on Tuesday. Entering and exiting Nablus has become an arduous task due to Israeli checkpoints which surround the city.
Ramzi's Return?
According to Kora Baladna Ramzi Saleh has made the trip to the West Bank and will start tomorrow's game. This is not one of the source we lean heavily upon here at Football Palestine but it has resulted in some chatter. According to the article (which cites a telephone conversation with the goalkeeper) there may even be a chance he participates at the Pan-Arab Games- contingent on how long Egyptian league play is suspended while the U23 team attempt to qualify for London 2012.
Shuffling the Deck
Jamal Mahmoud will look to give an opportunity to players to the players who did not see the pitch in Friday's game. A goalkeeping change will most likely be instituted with Shbair making way for Ramzi Saleh (or Abdullah Saidawi- if Ramzi's presence in camp turns out to be a rumor). Atef Abu Bilal and Ahmed Keshkesh should get a start here in place of Suleiman Obeid and Ismail Amour the latter of which will most likely start on the right of midfield.
Injuries- The PFA reported that Hussam Abu Saleh and Ahmed Harbi picked up knocks in Friday's encounter. Hani Abu Bilal is likely to get the start if one or both are not able to recover in time.