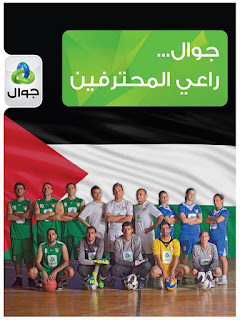 Telecom companies in the region have focused marketing efforts on local sports leagues. Whether its shirt sponsorship of teams or official sponsorship of tournaments, they do so to increase their visibility to their young target market. Jawwal, Palestine's leading telecom provider, followed the regional model in its official sponsorship of the West Bank Professional League. Well, enough marketing lingo, lets have a look at their new ad campaign, which encompasses the Women's game as well as other sports. This comes as Palestine's football, basketball and volleyball teams pack their bags for the Pan Arab Games in Qatar.
(click to enlarge) 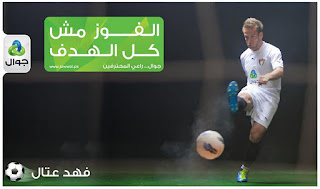 "Its not just about winning." - With Attal's recent form, he better hope so. 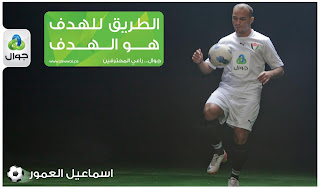 "The path to the goal is the goal." I admit it took me a while to get that. 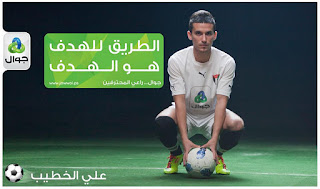 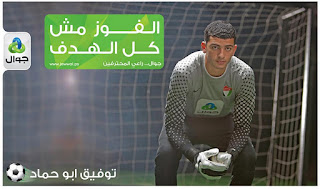 Jawwal presents itself as the "sponsor of Professionals." The campaign has star players delivering the message in colloquial Arabic to the broader audience: Work on achieving ambitious goals. A positive message, which I think is much needed among youth in Palestine, and this is not just from a sports perspective.

The sub-message - winning is not everything - could address fan tensions and unsportsmanlike behavior among players. I just wonder how effective these campaigns are. One thing is for sure, this is the first such campaign seen in Palestine.
Ali El-Khatib Fahed Attal Ismail Amour Jawwal Toufic Ali