How they got here: After meeting last year in the qualifying stage Palestine and Philippines meet again- this time with pride and the bronze medal at stake. Both teams will be disappointed not to be playing in Monday's Final after coming tantalizingly close to making history. The Azkals were up 1-0 with 10 minutes to play against Turkmenistan only to concede twice before the final whistle. Further rubbing salt in the wounds of the Pinoy players was the fact that this game could have been put away with better finishing and/or more alert defending. For Palestine the semifinal hangover is no less forgiving. For 43 minutes Palestine was resolute in defending and probing on the right wing through Hussam Abu Saleh. The goal from Pak Kwang-Ryong, after a rasping shot pinged off the crossbar, ruined any possibility of building on a 0-0 halftime score. 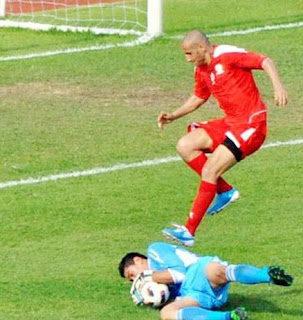 Etheridge Out: Had Neil Etheridge led the Azkals to their first ever Challenge Cup final he would have been a shoo-in for the Most Valuable Player award. Instead, he picked up an unnecessary red card  in the dying seconds of injury time and will be watching Monday's action from the stands. The Azkals have played well throughout the tournament but it has been Etheridge's stellar in play that has allowed them to paper over the cracks in their defence. The responsibility of protecting the Philippines' goal will fall to Army 'Keeper Eduardo Sacapaño who will be making his first official start.

Golden Boot Race: Phil Younghusband has been in great form this tournament scoring goals in almost every possible fashion. He'll most likely have to find the back of the net at least once to win the Golden Boot. Nipping on his heels are two North Koreans Pak Nam-Chol scored in every Group Stage but it was FC Basel's Pak Kwang Ryong who took home the spoils on Friday. For Palestine, Fahed Attal will be desperate to cement his status as the tournament's all-time leading scorer. His nine goals put him one ahead of another Chollima named Pak- Pak Song-Chol.

Key Players: Ángel Guirado is the man most responsible for getting the Azkals past Tajikistan and into the knockout round- setting up Younghusband's first goal and scoring the winner. He could prove to be the match winner again but it is more likely that the Filipino defenders will need to put in a solid 90 minutes if the Azkals are to win. Rob Geir was fantastic for the first 80 minutes against Turkmenistan if he can eliminate Palestine's goal threat and take the pressure off of Sacapaño in goal the Azkals will win this game. If not, then Guirado and the Younghusbands will need to be more clinical in goal.

For Palestine, the midfield will need to set the tempo for this game. Murad Ismail has had a fantastic tournament and will need to shut down the supply line to Phil Younghusband. Ashraf Nu'man and Mohammed Samara should be able to have more of an effect on this game after getting shutdown against DPR Korea. If the midfield can establish its presence then Palestine will resume normal service: Keeping possession smartly and picking the right moment to attack.

Team Spirit: The morale in Palestine's camp is running high with Ramzi Saleh saying that this has been the best national team camp he has ever been a part of punctuated by a lack of cliques. The goalkeeper went on to laud Jamal Mahmoud for his humility, his man management skills, and his ability to read the game and react. With Mahmoud's insistence that they will go all out for third place it doesn't seem that motivation will be a problem.