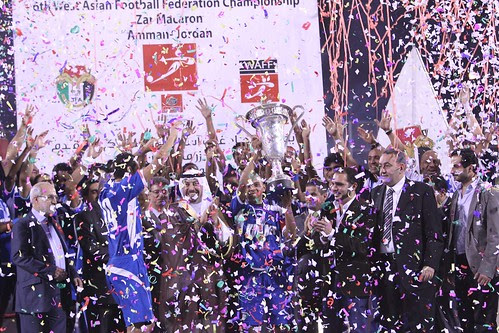 Group A rivals, Kuwait won the 2010 edition at the first time of asking.

By all accounts Palestine lucked out in yesterday's 2012 WAFF Championship draw; that's not to say that they should be celebrating a first-ever semifinal berth just yet. Oman and Lebanon have shown themselves to be capable opponents over the past 12 months and their participation in the final round of AFC World Cup qualifying provides proof of their quality. That said, Oman and Lebanon are different propositions at home and their performances have been wildly inconsistent as result.

Lebanon, Oman, and Palestine have the ignominy of never registering a win at the WAFF Championship against a WAFF team (Lebanon has the sole victory:  2-0 over Kyrgyzstan at the inaugural event in 2000). Given how similar these three teams are in quality we could see a continuation of the trend.

A look at the home and away records of all the teams in Group A after the jump...

Lebanon have been great at home and the tepid support received at Beirut's International Stadium for wins against Bangladesh and the UAE has since been replaced by sell-out crowds. They were unlucky to drop points to Kuwait and Qatar but have shown great resilience at every single turn recently beating Iran for the first time ever a to resuscitate their qualification hopes.

Oman has not won on the road in over a year, last picking up three points in Rangoon in a 2-0 win over Myanmar in July 2011. Conversely, they haven't lost a FIFA-sanctioned match in the Sultanate since a 0-4 thumping at the hands of Belarus 22 months ago.

Lebanon picked up a 1-0 win over Kuwait in Kuwait City- a result that proved to be decisive as The Cedars edged out Kuwait for a spot in the final ten of Asian World Cup qualifying. Other than that triumph, there has been little to brag about with the Lebanese collecting six losses on the road including a 2-0 reverse to lowly Bangladesh.

Kuwait will have home field advantage for this tournament (not that anyone should expect supporters to come out in droves) and they have been solid, if not spectacular, in their last seven home encounters. Palestine will know this team inside and out after facing them in the Pan Arab Games and the Arab Cup over the past 10 months.

Having labelled Lebanon and Oman as poor road teams it would only be fair to see how Palestine stacks up in comparison. Over the last eight encounters Palestine is 2-3-3 which on a PPG basis (points per game) puts them at 1.1- not great, but far higher than Lebanon (.5) and Oman (.38).

As a side that plays most its games away from home its perhaps not a surprise that Palestine has managed to become a decent road team. In fact, Palestine have yet to register an official win at home (they're undefeated with draws against Jordan, Afghanistan, and Thailand)  Since Jamal Mahmoud took the helm the team is 6-3-6* (with all matches taking place outside of Palestine):

*Includes the win Azerbaijan whined about and got taken off the books. The extra time loss to Kuwait is counted as a loss.