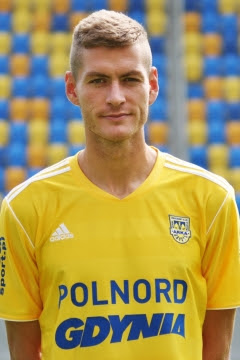 Friend of the blog Juan Carlos Galindo recently interviewed National Team CB Omar Jarun for his blog De Penalty. Below are pertinent excerpts translated from Spanish. For those interested in Galindo's coverage of Palestinian Football his articles are available here, here, and here.

Born in Kuwait and raised in the United States Omar Jarun is one of a handful of Palestinians playing professionally in Europe. The 29 year-old recently made the jump from Arka Gdynia, a side fighting to regain its place in the Ekstrakalassa (The Polish Premier Leage), to Sporting Charleroi of the Belgian Jupiler League.

His first foray into football was as a forward, a position he played at the University of Memphis and later at the University of Dayton. He has since been converted into a ball playing center back. Nearly two meters tall, Jarun is excellent in the air and great at defending set pieces.

Jarun came to Europe in 2009 after a stint with the Vancouver Whitecaps (where he played a key role in a title-winning team). His journey to Europe is heavily intertwined with former Czechoslovakian International, Petr Nemec, the man who signed him for Flota Swinoujscie. A year after landing in Poland he transfered to Pogon Szczecin where he was an intergal part of a magical Cup run that saw the First division side advance to the Final (only to lose to Alexis Norambuena's Jagellonia Bialystok). After a short stint with Tampa Bay FC of the NASL Jarun was reunited with Nemec at Arka Gdynia. Over the summer, Jarun moved on a Bosman to Sporting Charleroi, ending his three year stint in Poland.

Jarun's first call-up to the National Team came in 2007, in a 2010 World Cup Qualifier against Singapore. Jarun had to wait until 2011 to receive his second cap but has since become an indispensable part of the defence under Moussa Bezaz and now Jamal Mahmoud.

Omar Jarun: It was a great experience, one that ran the gamut of the emotional specturm. I flew to Amman and then crossed the border in a bus. The first time I crossed over I was detained for over six hours at border control, an experience I shared with Roberto Bishara. The members of the Israeli security force repeatedly questioned me as to why I was here, who I knew here, and how long I was going to stay. I brushed it off as a one-off experience for reasons of security but the second time I travelled it was not a happy experience.

OJ: I was detained again, this time for four hours. I thought that it would be easier to get through border control but they asked me the same questions over and over again. They knew full well that I was here to play football and that I would be leaving once we had played our match. My breaking point came when they accused me of falsifying my American Passport. I became infuriated and demanded that I contact a representative at the American Embassy. This made the soldiers take a more cooperative stance, the soldier who previously interrogated me suddenly walked into the room and said: "This guy is not a terrorist. I remember him for the last time he was here."

The Israelis knew perfectly well that I was of Palestinian heritage and wanted my experience to be so horrible that I would give up on every coming back to visit. But it had the opposite effect on me I will continue to visit Palestine and speak out about my experiences until this treatment stops.

DP: Your American Passport didn't help you in these circumstances?

OJ: The Israelis have me registered as a Palestinian in their database. So I receive the same treatment as everyone else.

[A couple of other questions are asked about political situation, here's what Jarun had to say about his teammates experience]:

OJ: In general I don't discuss politics with my teammates. I speak with the players from Gaza about the difficulties they face in the entering and exiting the Strip. They cannot go home to see their families for feat that the Israeli authorities might not let them return to the West Bank (to continue playing for their WBPL clubs). Imagine a situation where you cannot visit your loved ones for years despite only living 40 kilometers apart. And I say years because there is no possibility for men between 18 and 40 years to enter or exit Gaza. This is not just.

DP: What do you make of the WBPL?

OJ: To have a professional league that functions without interruption is fantastic. The level of play is getting better and it will improve even more over the next five years. In spite of difficulties, we have a good nucleus of young players that are coming up the ranks that can help improve our level of play. DP: How would you describe the National Team's level of play?

OJ: I can say without a doubt that we have the quality to be amongst the 100 best footballing nations in the world. We have only played a handful of matches in Palestine since becoming members of FIFA, for the first 13 years we used "host" home games outside of Palestine. Clearly, the results are not the same when we can't play in front of our supporters who are a constant source of strength for us.

We also have another problem which is that Israel oftentimes does not issue the necessary visas for our players to enter and exit the country. As a result, we are sometimes shorthanded when we play abroad. In any case, I think the goal is to be in the Top 100 by 2014 which is a totally realistic goal with or without Israeli interference I am sure we can achieve it (Palestine are set to rise to 148th in October's FIFA Ranking).

On Home Support, challenges facing the National Team, and his personal goals:

OJ: Our supporters have a very European character and the atmosphere during national team games reminds me of the support I experienced while in Poland.

The work of Moussa Bezaz as manager has been fantastic and the arrival of Jamal Mahmoud, a manager with character and discipline has helped turn around the team. The second challenge now is securing friendlies on FIFA dates against competitive teams and to hopefully have our players obtain the necessary visas to travel and play in those games.

My experience in Poland has been fantastic but now I have a new challenge in Belgium. I have always dreamed of playing in the Bundesliga and this is the goal I am continuing to work towards. I will not forget my country and those that live live in the diaspora. I want to be able to represent the hopes and dreams of the Palestinian people and that we deserve statehood.