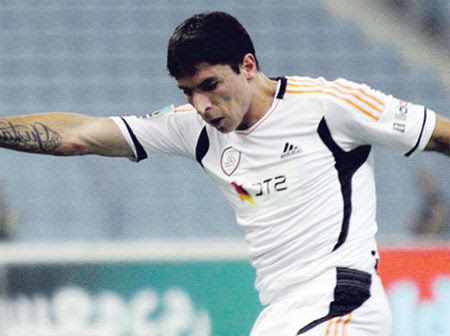 Al-Shabab (KSA) striker Sebastian Tagliabué has revealed that he is set to receive Palestinian citizenship sometime in the new year. The move is an effort by his club to register him as an Asian player and free up one of their three international player slots. In an interview with Al-Arabiya's Fil Marma Tagliabué provided very little information in regards to his heritage and then went on a tangent (at least according to the translation- which could have been botched) about how he thought Muslims only lived in the Gulf countries.

According to the player, it was the club who informed him of the opportunity and he seized it because he wants to continue playing for Al-Shabab. When asked about whether or not he would be interested in representing Palestine internationally, the Argentine forward responded: "Sure, if the opportunity presents itself, why not?"

Tagliabué is the second leading scorer in the Saudi Pro League with 9 goals (eight from open play) this season. The 27 year old is currently averaging a goal every 113 minutes and has already equaled the amount of goals he scored for Al-Ittifaq last season. His career has taken a long and winding road, he toiled unrecognized for years in Argentina's fourth tier before making the jump to Chile's Primera with Everton where five goals in 12 appearances earned him a move to La Serena where he continued to score goals (12 in 24 starts). Although he fizzled at Once Caldas in Colombia a move to Saudi Arabia has seen the striker become one of the most feared goal scorers on the peninsula.

Questions will arise about the player's motives and many fans are still reeling from the Sharbini saga. I am not against tapping the diaspora for talent but the players that join must be men of good character. The last thing you want is a selfish prima dona to join the fold and destroy the excellent spirit and camaraderie between the players. Roberto Kettlun put it nicely: