Another March in Nepal

February 19, 2013
Preparations will get underway tomorrow for the AFC Challenge Cup Qualifiers with a training camp in Jericho and the team will leave for Kathmandu in a week. Palestine's qualifying group includes hosts Nepal, Bangladesh and debutants the Northern Mariana Islands. The group winner will earn a spot in the finals of the tournament next year.
The group will likely be decided on the final matchday when Palestine meets Nepal and, for the sake of buildup to the event, we offer a brief flashback to the last two times the sides faced.

Palestine played out a goalless draw with Nepal and Saeed Sobakhi scored the equalizer to tie the game against Kyrgyzstan. By the end of it, all teams had 2 points from 2 matches and it was the Central Asians who qualified to the 2010 AFC Challenge Cup by virtue of goals scored. Nepal earned the runner-up spot in the group for having less bookings than Palestine.

We didn't have a feed to watch the action but we sure got our entertainment value from pre-match comments. When asked about Palestine's optimism, Nepal coach Yogamber Sowal said, "They are challenging the bee hive. You can easily imagine what will happen when you buzz the bee hive". Such gems are few and far between at this level of the game. 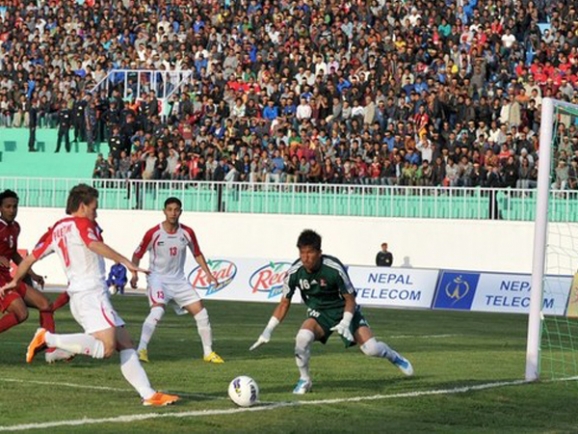 Palestine played Nepal in their first group game in what proved to be a more exciting affair than their previous encounter. Twenty thousand Nepalese fans cheered on the Gorkhalis hungry for an upset, but Jamal Mahmoud’s boys proved to be too good for the hosts.

Nepal made a surprise attack at kickoff, rushing the ball forward to Ju Manu who had taken off towards the Palestinian goal as soon as the whistle blew. He was matched by the defence as the ball was converted into a goalkick. A few minutes later, Gaza striker Alaa Attieh put Palestine in the lead with Fahed Attal providing the assist. Palestine were happy to absorb Nepali attacks that followed; captain Ramzi Saleh doing his part well between the posts neutralizing seemingly dangerous crosses. In the second half, Fahed Attal doubled the lead when Attieh snatched a loose ball to set him up for a one-on-one with the keeper (full match video).

Palestine qualified to the semi-finals but couldn’t match North Korea, especially with the defensive line that was hampered by absences and injuries.