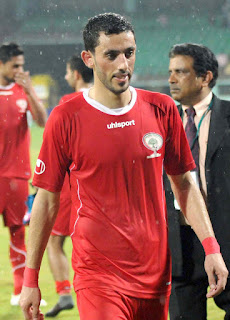 India took the lead twice during the first half of today's encounter in Kochi but a quick succession of goals early in the second half put Palestine in a comfortable lead which it had no trouble protecting for the rest of the match. Details after the jump. 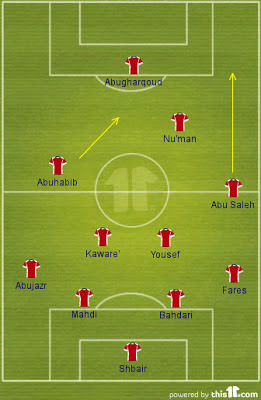 Match Summary
India played off the electric atmosphere in Nehru stadium utilizing quick passing play, keen to strike when Palestine were most vulnerable. Their efforts paid off when Clifford Miranda took advantage of a deflection off Bahdari to hammer the ball into the back of the net. Palestine began to look increasingly dangerous, Ashraf Nu'man had a one-on-one chance that the keeper took care of. It wasn't until the 31st minute that Palestine equalized, Raed Fares making an enterprising run down the right flank picked up the ball and crossed it into the Indian box where Nu'man was waiting to slot it in cleanly with a volley. India however had other plans - just as the first half was ending Syed Rahim Nabi, I-League player of the year as announced before the match, headed a corner in giving his team the lead once again. The first half scoreline was logical as the Palestine midfield was at best shaky and had allowed India plenty of chances to build up attacks.

Jamal Mahmoud has a knack for winning second halves and whatever he told the players in the locker room seemed to do the trick. Husam Abu Saleh scored the equalizer with a belting shot soon after coming back from the dressing room and later earned a penalty which Nu'man easily converted.

Further behind in the Palestine lines drama was unfolding as Bahdari - tasked with marking Sunil Chhetri in a captain vs. captain battle picked up what appeared to be a muscle injury and had to be substituted. Luckily the capable Nadim Barghouti was ready to take on his duties. Ma'aly Kaware' was rightly replaced by Mahmoud Sheikh Qasem ("Al-Koori") who, despite his young age, imposed a greater presence in the midfield.

The rest of the match was the Ashraf Nu'man show as he effortlessly maneuvered around the third of the pitch. He completed his hat-trick when he capitalized on a loose ball to beat a defender and put the ball past the keeper.