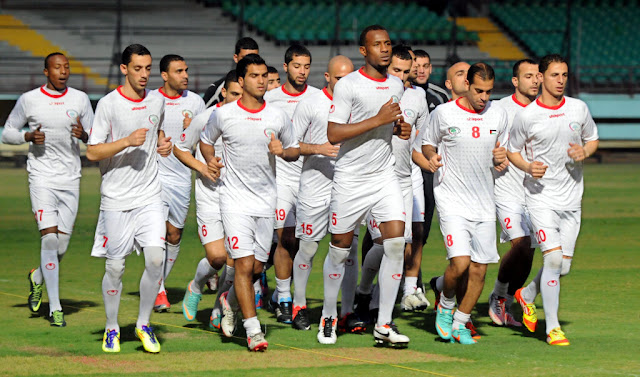 The National Team received a warm welcome as they landed in Kochi in the Indian state of Kerala on Sunday. Pictures coming out of Cochin International Airport showed the players being greeted with smiles and mini-bouquets - a lovely gesture by the Kerala Football Association.

The players took the field at Jawaharlal Nehru stadium today (shown above) amid revelations that Imad Zatara will not be catching up due to sickness. Jamal Mahmoud has plenty of options in the midfield, but will surely miss the services of the plucky winger who could have caused a lot of trouble to the Indian right flank.

Palestine fans are anxious to see Abdel-Latif Bahdari (#5 above) back in national team colours. Since the center-back joined Hajer in the Saudi Professional League a year and a half ago, he did not play a single match for Palestine - reasons cited being the club refusing to release him, injuries and personal matters. With the India friendly falling on a FIFA matchday, the club had no choice but to release him. It will be interesting to see how much he developed as a player - his role in Hajer has been that of a leader, marshaling the back-line in the face of stronger opponents and scoring goals in the process. I would expect him to wear the captain's armband on Wednesday. He will be tasked with neutralizing India's Sunil Chhetri, of Sporting Lisbon Reserves fame.

India have been training rigorously on the same grounds with Wim Koevermans focusing on match videos in preparing his team. The Indian squad has been boosted by the naturalization of Indian/Japanese Arata Izumi who will be playing his first game with the Blue Tigers on Wednesday - the 30 year old attacking midfielder was called up after displaying good form with Pune FC in the I-League this year.

Both teams will be keen for a good showing ahead of their Challenge Cup Qualifiers and by the looks of it, it could be a close one. Palestine might fancy their chances thanks to a strong record against South Asian sides - but India are not to be underestimated, especially with a home crowd behind them, their new coaching direction and the motivation to beat a higher ranked side.