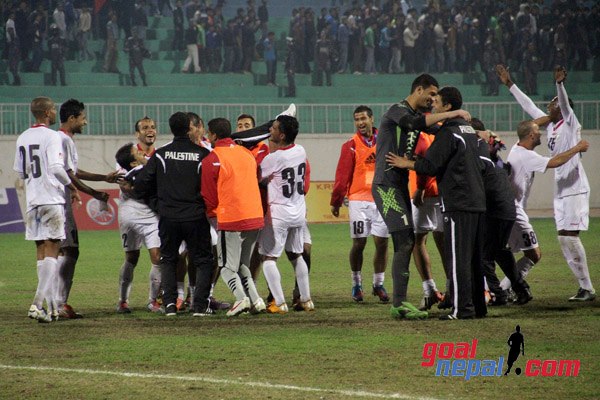 Palestine were all smiles in Nepal today despite playing out a dull 0-0 draw with the hosts. The point earned was enough to qualify for the 2014 AFC Challenge Cup. It would be appropriate to categorize the squad fielded for these qualifiers as a 'reserve' side - key players were missing in the defense and the midfield since they couldn't be released by their clubs - but the WBPL and Gaza players, as expected, were able to finish the job with no trouble.

Jamal Mahmoud has a long year ahead of him, his goal now is to build the team that will win the Challenge Cup - which itself is a means to an end: a spot at the 2015 Asian Cup. We could be off to a good start with friendlies with Kuwait and Malaysia already set for this month.

There was plenty of hope and heartbreak today among the nations attempting to qualify - Afghanistan came from behind despite a red card to equalize with Laos in their Group C match, the result they needed to win the group. India were set to qualify in Group A but hosts Myanmar had other plans. In the deciding match, a lone goal by substitute Soe Min Oo against the Blue Tigers propelled Myanmar into first place and India's fate now depends on the outcomes of the other groups - they can still qualify as one of the two best runners-up depending on how the other groups turn out.