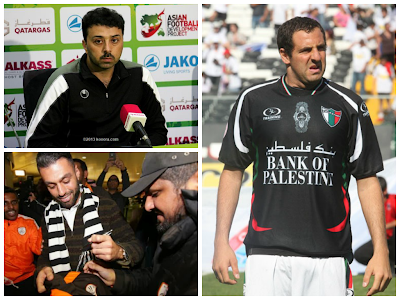 First off, I hope the new year has been kind to everyone reading this. It certainly could be a landmark year for Palestinian football and by no means started off calmly, so here's a roundup of what's buzzing.

The Pressure is on for Jamal Mahmoud

Calls for Jamal Mahmoud's head reached unprecedented levels after the WAFF group stage exit. Rumors of his resignation even circulated, prompting him to issue statements of denial to the press. Contrary to the wishes of some hotheaded (and irrational - if you ask me) fans, JM will remain in charge to prepare Palestine for the Challenge Cup and lead the team in the Maldives. However it is safe to say that JMs ability to bring home the Challenge Cup will determine whether or not he remains as Palestine manager.

Pakistani sources report that Pakistan will host a quadrangular tournament in April including Palestine, Afghanistan, and the Philippines. There has been nothing officially announced beyond that, though Jamal Mahmoud has stated that a preparation plan has been made for the Challenge Cup.

This tournament could serve as very appropriate preparation since the teams participating are the kind of teams that Palestine will face in May. It gets a little tricky though. Palestine will very likely end up facing Afghanistan or the Philippines (or both) in the Challenge Cup, so a balance will have to be made between experimentation and being careful not to expose winning cards/weaknesses.

Roberto Bishara, Palestine international and icon of Chilean Primera side Palestino has parted ways with his club after being informed that he does not fit in manager Emiliano Astorga's plans, much to the ire of fans who believe he should have been afforded more respect in the process. He had not been getting much time on the pitch as it was - only being considered for cup fixtures. The 32 year old defender is in-between clubs and could be headed to the Chilean second division.

Omar Jarun has returned to North America as one of the first signings of NASL expansion side Ottawa Fury FC. Omar did not quite break into the regular side of Sporting Charleroi in Belgium having only made two appearances, coming off the bench in both. The move should enhance his chances of getting a call-up, and he probably will in May - but after seeing the successful center-back combination of Abdellatif Bahdari and Daniel K. Mustafa in the WAFF, I would say he has his work cut out for him in getting a starting spot.

Ashraf Nu'man has signed with Al-Faisaly of Saudi Arabia. This makes him only the third Palestine international to play in the Saudi top flight and his new club will be counting on his offensive prowess to save them from relegation (currently second-to-last in the standings).
He leaves with his hometown club Taraji on top of the table at mid-season, largely thanks to his 11 goals, and they will now have to do without him as other clubs up their firepower. Hilal Al Quds have signed national team striker Eyad Abugharqoud who had a half-season stint with Al-Baq'a in Jordan. Elsewhere domestically, Abdullatif Bahdari severed his contract with Shabab Hebron and could be making a move abroad.

Imad Khalili transferred to Al Shabab of Saudi Arabia on a loan from Helsingborgs. Having represented Sweden at all youth levels, the 26 year old received his first senior Sweden call-up last week, albeit to a 'B' squad, which he refused. The refusal is probably because of his commitments to Al-Shabab rather than an outright message that he will represent Palestine (he refused a call up to Palestine in December citing professional reasons). This will be a case watched closely as Palestine desperately need a striker like Khalili, who was top scorer in the Swedish Allsveskan league last season. To say the least, he has been very dodgy on the matter.

Al-Shabab is currently fifth in the Saudi standings with around 20 points separating them from leaders Al-Nasr. Fans of the club have enthusiastically received news of Khalili's signing, swarming him upon his arrival in Riyadh.

The Palestinian community in Chile came to popular attention in 2002 when Nicola Shahwan took over as coach and brought with him a contingent of Chile/South America based players of Palestinian ancestry. Since then the national team has continued to draw players from the community.

Club Deportivo Palestino is the Palestinian flag-bearer in the Chilean Primera División. The club, which was established in 1920, has a rich history, winning the Primera División and Copa Chile two times each in the 1950-80s era and most recently finishing league runners-up in 2008. Current Man-City boss Manuel Pelligrini notably spent some of his formative managerial years at the club.

The club has gotten the attention of international media due to a shirt design which has angered Chile's Jewish community and started a war of words. The design in question has the '1s' of the player numbers replaced with maps of historic Palestine. Gerardo Gorodischer, President of Chile's Jewish community, has accused the club of using football to "lie and hate", prompting the Palestinian Federation of Chile to respond in support of the club and the shirt design. The Simon Wiesenthal Center  penned a letter to the President of the Chilean National Football Association accusing Palestino of "wiping Israel off the map", and the ADL even chimed in. Grab the popcorn folks.

Palestino debuted the jersey design with the start of the Apertura season and has been in fine form since - drubbing Everton 4-0 in the season opener and recording an impressive 1-0 away win over powerhouse and cross-town rival Universidad de Chile, leaving them on top of the table two rounds in.

Attending a match at La Cisterna Municipal Stadium has been on my bucket list for quite a while and it sure has moved up a few notches lately.
Palestinians Abroad