Full Highlights & Recap after the jump...

Highlights (All of Palestine's scoring chances)

Recap: Saudi Arabia jumped on defensive errors either side of halftime to secure their first ever friendly victory of the Juan Ramon Lopez Caro era. Palestine came into the match with a slightly altered look as Khaled Salem earned his first start since March 2013; playing in a two striker formation alongside debutant Mahmoud Eid. Palestine were lucky to have early defensive lapses go unpunished, as huge gaps were left between the defensive and midfield lines that allowed the always quick Saudis too much space to operate. Palestine offered some attacking verve down the left flank as Maher and Jaber combined well but they were being run ragged on the other side of the pitch. A costly error by Husam Abu Saleh put Tayseer Jasim into acres of space beyond the guise of Raed Fares. He expertly beat an on-rushing Bahdari and Ramzi Saleh before knocking the ball back to Al-Hazazzi for an easy finish. Ahmad El-Hassan's only change at halftime paid immediate dividends- Ashraf Nu'man replaced Khaled Salem- and within four minutes the Saudi-based player created two scoring chances; the second of which really should have been slotted home by Mahmoud Eid.

With Palestine looking far more vibrant Saudi Arabia again managed to exploit Palestine's right side again. Capitalizing on Husam Abu Saleh's failure to track back, Al-Hazzazi turned provider- clipping a ball over the defence and allowing the scary fast Muwalad to latch onto the ball while running at close to full speed.

A chance at a late consolation via a set piece was headed over the bar by Abdelatif Bahdari. While not unexpected, Ahmad El-Hassan will perhaps feel a little aggrieved that Palestine's positive spells didn't translate to shots on target and goals. The result leaves him with a lot to contemplate ahead of the Vietnam encounter.

What I liked: Abed Jaber is a beast. He has nine caps to his name but was one of the best players on the day. He handled his defensive responsibilities and also contributed a lot going forward.

What I didn't like: The 4-4-2. I don't think this formation suits us at all- it asks too much of Khader Yousef and Murad Ismail. Neither player is adept at creating chances, they are facilitators- their main role is to win the ball, protect the defence and play simple passes. It was painfully obvious that the the middle are in the attacking third was being neglected. When Ismail or Yousef did pop up there, they were unable to conjure up something productive. From a defensive standpoint, I don't think you can play a 4-4-2 without pressing and staying compact. We aren't a fit enough team to press for 90 minutes and by the look of Husam Abu Saleh- it seems that some of  our midfielders aren't used to the added defensive responsibility.

Uniform Watch: Palestine donned red shirts and black shorts, provided by Legea, but were wearing tracksuits from Peak. It amazes me how the team clearly needs an apparel supplier and have continuously ignored at least two companies in their attempt to provide them with a kit sponsorship.

Next: Palestine is set to play Vietnam in Hanoi on November 9th at 1000 GMT. 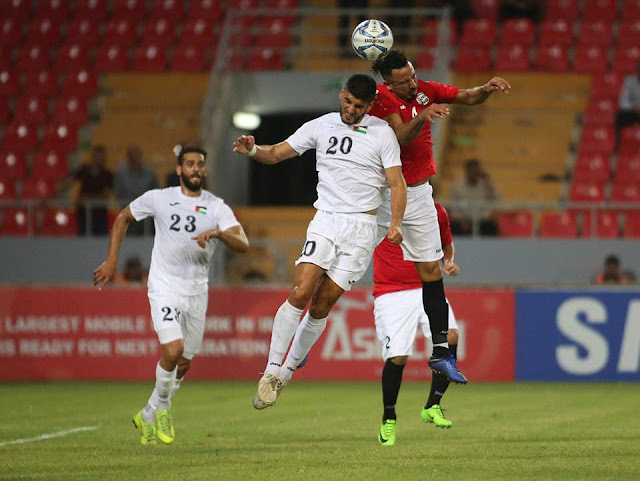 
Recap: In a refreshing change, Palestine took the game to Yemen from the first minute showing an attacking intent that paid dividends in the first half. For their part, Yemen showed they could create a fair amount of danger on the counter as they racked up the first of four first half corner kicks inside the game's first three minutes.
Following a helter skelter opening stanza, the game settled into a predictable pattern. Yemen ceded  possession and frustrated Palestine by quickly collapsing into two banks of four. Al-Fida'i were guilty of impatience at times- booting the ball forwards aimlessly or settling for pot…