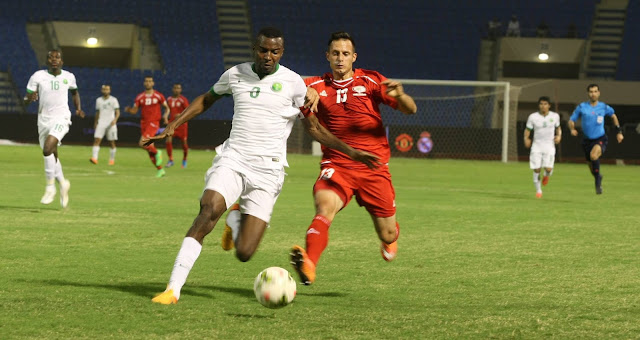 Full Recap and Highlights after the jump...

Recap: Palestine fell victim to a late defensive error after a topsy turvy encounter in Saudi Arabia's Eastern Province. No one could have written a script quite like this one- Palestine were stretched and confused for large periods of this game but they managed to roll with the punches and convert the chances that fell to them.

Al-Fida'i got off to a horrible start with Al-Shehri ghosting behind Musa'b Al-Battat for the first goal after only six minutes of play. Straight after Palestine showed some tenacity through a wonderful Mahmoud Eid solo run that resulted in a shot that whizzed just past the far post. For all their spirit, Palestine's defence were at sixes and seven and needed Toufic Ali or the last minute intervention of their centerbacks to avoid falling further behind. Palestine did manage a shot in goal in the first half with Khader Yousef stinging the palms of Sharahli who spilled the ball upon contact.

With Palestine on the back foot Barakat would have been relieved to get to halftime down 1-0. Seconds after the break, though, Saudi Arabia doubled its lead through Al-Sahlawi. A deflected ball in found Al-Sahlawi who made no mistake from six feet from net.

Palestine would get one back though through an expertly designed set piece. Mahmoud Eid's precise delivery found an onrushing Abdullah Jaber who headed the ball across the face of goal to a wide open Pablo Tamburrini who headed into an empty net.

As the game petered out it seemed that Palestine would be made to settle for a 2-1 loss. Enter Matias Jadue.

Al-Nasr goalkeeper Khaled Sharahali's casual touch on the ball was punished by another Palestine debutant who equalized much to the delight of the away fans.

With only seconds left in injury time it seemed Palestine had grabbed an important point. Alas, it wasn't meant to be- a fluffed touch from stand-in captain Ahmed Harbi gifted Sahlawi the ball in the box. Game. Set. Match.

An important lesson for a young Palestine squad.

What I liked: Fantastic spirit from the side to overcome the injuries to Ashraf Nu'man, Abdelhamid Abuhabib, Imad Zatara, Alexis Norambuena, and Javier Cohene. The absences of surefire starters Haitham Dheeb and Abdelatif Bahdari only deepened the crisis. That said, this young squad almost got a point out of what is sure to be their most difficult away encounter. There is reason for optimism and Abdel Nasser Barakat should be given time to implement his vision.

What I didn't like: Not to blame a single person but Ahmed Harbi was jumping up and down at Matias Jadue's equalizer. As captain, he should have been grabbing the players and focussing them for the next two minutes of play. The difference between one point and none at this level is very, very slim. Focus is essential.

Jersey Watch: According to the PFA there is a deal in place with Chinese sportswear company, Peak. Yet, the team has no training jerseys and the kit they do play in is atrocious and there are no signs that this two-year deal involves mass production of the jersey in order for it to be sold on to the fans as was claimed.