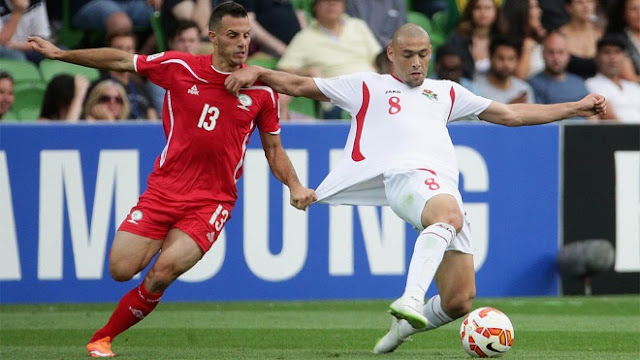 As we get ready for another round of World Cup qualifiers, we bring back a classic Football Palestine segment: the player interview.

Jaka Ihbeisheh, was born in Ljubljana to a Palestinian father and Slovene mother. He started his career with hometown club NK Interblock as a youth player and has represented several clubs in the Prva Liga. He was under the PFA's radar until the final run-up to the 2015 Asian Cup when he was called up to the Dubai training camp, earning his first cap in a friendly against Uzbekistan. The 29 year old winger went on to engrave his name in Palestinian football history (in an otherwise forgetful tournament) scoring Palestine's first Asian Cup goal.

We reached out to Jaka as he was preparing for his last club match before the international break - after which he will board a flight to catch up with the squad in East Timor. Read more below for the interview.

FP: You've played in several positions on the pitch. Any you prefer in particular?

For the most part of my career I have played as a winger, but since I can play in several positions, I am currently playing as a full-back (mostly right, but I can also play the left) in my current club FC Rudar. FC Rudar has an offensive game style with an emphasis on possession of the ball, so that enables me to also engage in attack. This game style suits me very well.

If I had to choose my favorite position, I would choose right full-back. In the Palestine national football team the coach awarded me the position of a left midfielder, which also works for me. What matters to me is to be able to help the team achieve better results.

Slovenia has punched above its weight in international football. What is working for them?

That is correct. Slovenia has played in two World Cups and one European Cup, which is a great achievement for such a small country. We hope to qualify for the European Cup in France next year as well. Because Slovenia is a small country, there are only 10 teams playing in its top league. These teams play again each other four times a year. The league is increasingly improving. In the last season, the champion FC Maribor even played in the Champions League.

Many young players from Slovenia get the opportunity to play abroad, where they get the necessary experience and are then invited to play for the national team. The national team consists mostly of players who play abroad. Many of them play in top clubs such as Inter Milan, Atletico Madrid, Fiorentina, and Bayer Leverkusen.

How do you rate your Palestine teammates who play in the Palestinian league?

Many have great technique, are well-prepared and could also play in other top leagues. The biggest progress could be made in tactics.

Moving on to the Asian Cup, the 4-0 loss to Japan in the opener was somewhat expected. But nobody expected the Jordan result. What went wrong there? And what is your overall opinion of our Asian Cup appearance?


The Asian Cup exposed our inexperience. It was hard playing against Japan as they are one of the toughest national teams with excellent players (they were deemed to win this Cup). We had a great start in the game against Jordan as we had several opportunities at the beginning to score a goal and in my opinion, we controlled the game. However, soon after the first goal, everything changed. We ended up receiving five goals scored too easily from their counterattacks, which is unacceptable at this level. We did not show our true character and we did not function as a team. We played as a team of eleven individual players and doing this you cannot achieve anything.

We lost all three games and went home extremely disappointed and with a bitter taste in our mouths, thinking that we could have done much more. The only highlight of the Cup was that we were able to show the world that Palestine is a “real” country, with “normal” people, who deserve to live in freedom.


I am very proud of the goal that I scored in the Asian Cup and this is a moment I will never forget, although I would gladly exchange it for a victory or qualification into the next round.

Speaking of firsts, you took part in your first home match last month. Its different playing in front of the home crowd isnt it?

I agree. Playing for the first time in front of a home crowd is truly special. It is much easier playing in front of your fans who support your throughout the game than playing an away game. It was their support who helped us achieve a tie against the UAE. It is an amazing feeling to play in Palestine and every team is going to have a hard time winning. I hope we will be allowed to play all home matches in Palestine. It is what the people of Palestine deserve. 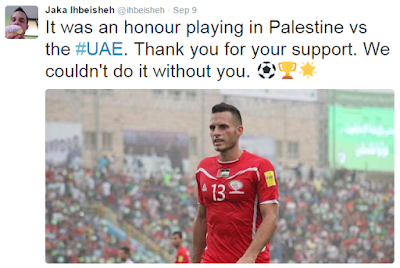 Do you feel a change in the team between the Asian Cup days and now?

The current national team is much younger than the one that played in the Asian Cup. We are much more connected and we have great team energy. I have no fear for the future of Palestine national football team.