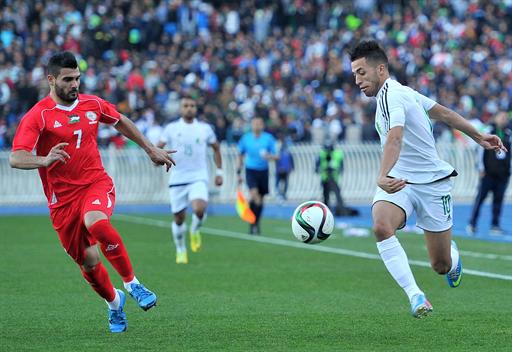 Highlights after the jump...


Recap: In a highly anticipated encounter, the friendlies of friendlies got off with a bang. Zinedine Ferhat's cutback pass to Mohammed Benkhamassa rattled Palestine's crossbar signaling the attacking intent from the hosts. Over the next 10 minutes Palestine stumbled around somewhat punch drunk but were able to compose themselves and slowly get back into the game.

Their main attacking outlet was the relentless running of Ahmad Abu Nahyeh who kept the Algerian defence occupied all afternoon. Abu Nahyeh's first run of intent resulted in a massive collision between the Algerian goalkeeper Salhi and himself after 12 minutes. Seven minutes later, he again chased down Salhi in the box and continued running- eventually picking the pocket of Reyad Kenniche. Abu Nahyeh's simple pass found Sameh Mar'aba in the box who should have opened the scoring.

Algeria kept possession  after that but only threatened Palestine once- off a Haddouche free kick. Palestine sprung up again in the dying minutes of the first half. Abu Nahyeh teed up Sameh Mar'aba on a breakaway- and the shot was put out for a corner after the forward opted for placement over power. The Khader FC man had a wide open header on the ensuing corner also flash wide of the bar. Mar'aba completed a hattrick of spurned chances just before the halftime whistle getting pushed off the ball while one-on-one with Salhi.

Five minutes into the second half a supporter ran onto the pitch and proceeded to solicit hugs from the Palestinian players. He was duly escorted off the pitch by the police shortly thereafter.

Palestine's breakthrough would come just past the hour mark. Pablo Tamburrini eluded two Algerian players and sent a switching ball to Tamer Seyam who wisely awaited the onrushing Abdallah Jaber. The left back's pace got him into a threatening position and his cross was inch perfect for Abu Nahyeh who redirected it into the net.

Queue euphoria in the 5th of July Stadium. Algeria should have leveled things less than 10 minutes later only for Zakaria Haddouche to fluff his lines on a simple header with a gaping net in his path. A few minutes later Abdelkader Miziane's powerful blast from just outside the 18' fizzled over the crossbar.

Palestine would get two chances to add to the lead. The first off a free kick that targeted Abdelatif Bahdari at the far post and the second- a sensational through ball from Tamer Seyam to Fadi Salbees who did everything right except for the finish.

In the end, the 1-0 result represented just scoreline and should imbibe Abdel Nasser Barakat's men with plenty of confidence.

What I liked: The fans! 80,000 for an unofficial friendly?!?! Fans cheering against their own national team? Only in the land of 1 million martyrs! Algeria and their fans have been fantastic hosts and training camps as well as matches should become a more regular occurence for the two sides.

What I didn't like: Palestine played well but they were really shaky in the first stanza of the match. Sameh Mar'aba's finishing was atrocious and that should mean he drops to the bench for the match vs. UAE.

Man of the Match: Abu Nahyeh. Palestine have found their striker his goal was just reward for all the work he put in during his time on the pitch. Could have had a couple of assists if Mar'aba had been more clinical in his finishing.

Algeria Verdict: A good side with plenty of talent. Lacks an out-and-out striker to finish chances and occupy the center backs. Algeria's Olympic side also plays on the counter and perhaps they didn't know how to approach a side that essentially mirrors their style. If they can get one or two of the oveaged stars (Slimani and/or Mahrez) to play in Rio this summer they might be able to mount a serious a challenge.

Age Factor: Some people will point to the fact that this was Palestine's senior side against a U23 team and dismiss the result entirely. While there were some wise old heads out there, Palestine for the most part, fielded players with only a smattering of international experience. This has indeed been the modus operandi since Barakat took over last year. In fact, of the 11 starters only two were over the age of 26- Abdelatif Bahdari (soon to be 32) and Tamer Salah (29) while Battat, Jaber, & Mohammad Mara'ba would have been eligible to play in Rio this summer had Palestine qualified- the rest of the starting contingent have yet to turn 24 with the exception of Pablo Tamburrini (just turned 26), Toufic Ali (25), and Abu Nahyeh (24).

Turning Point: Palestine seem to have found an identity and the players needed to implement a style of play. There was a good deal of experimentation going on in the first qualifier six months ago- that's not the case now. Young players look like seasoned vets in this squad: Darwish, Jaber, Seyam, and Abu Nahyeh were instrumental in the win and seem to be destined to be the core of the national team for many years to come.

What's Next: Palestine takes on UAE in a must win World Cup qualifier in Abu Dhabi on March 24th.