Palestine rest and recover ahead of anticipated revenge vs. Timor Leste 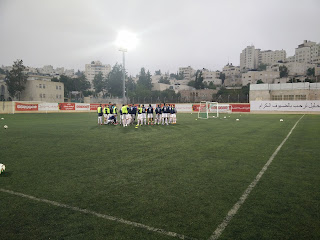 (Hebron, Palestine) // Palestine got their first training underway this evening at the Hussein Stadium after an arduous journey back home from the United Arab Emirates.

The national team caught a bus in the wee hours of Friday morning bound for Dubai were they flew to Amman. At that point the team split up, with dual nationals making their way to the Jordan Valley border (a two hour drive from the airport) while the rest of the team crossed over from the Allenby Bridge.

Ahmed Awad and Jaka Ihbeisheh were held at the border for three additional hours- further delaying their arrival to the team hotel in Ramallah.

Departing from the team's ranks is Matías Jadue who returned to Malaysia to help PKNS FC in their FA Cup semifinal.

Carlos Salom- who was also due to join the squad but was delayed due to paperwork and visa issues is not expected to travel for this game.

Not participating in the session due to light injuries were Abdelatif Bahdari (foot) and Yashir Pinto Islame. Ashraf Nu'man and Azmi Shweiki weren't with the team and it's presumed they were given excused absences by the team.