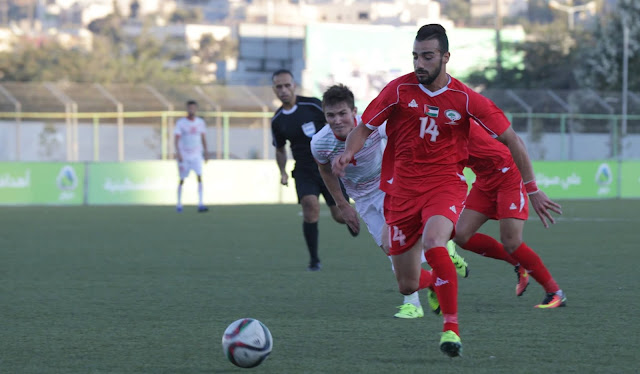 Highlights and More after the jump...

Recap: Palestine started the game well; controlling possession and pinning Tajikistan in their own half. The game's first chance fell to Yashir Pinto Islame- who combined well with debutant Carlos Salom but could only muster a shot straight at the Mahkamov. The Malaka United striker would spurn another chance- off an Abdallah Jaber cross moments later.

Tajikistan for their part grew into the match and as Palestine piled numbers forward- they showed a knack for breaking effectively. Toufic Ali stopped Tajikistan's first shot of the game with a great save off of the foot of Dzhalilov.

Palestine's attack flickered but never shined through in the first half. Carlos Salom was the architect of many a driving run but he failed to properly connect with his teammates.

A lost ball by Islame was quickly played forward and this time- Dzhalilov did brilliantly to bust the offsides trap and set up Umarbaev who slotted home.

The resulting goal was the first time Palestine trailed in five official home matches dating back to 2008 (1W 4D).

There would be no historic result for Tajikistan, though as Carlos Salom who bamboozled the Tajik defence on the night converted a penalty after a blatant handball in the box following a corner kick. He joins Matias Jadue, Pablo Tamburrini, and Yashir Pinto Islame in scoring who also scored on their debuts during this qualification cycle.

Palestine and Tajikistan traded punches throughout the half and although Palestine had more chances to grab a winner it never came.

Abdel Nasser Barakat, perhaps with an eye in building increased team chemistry, waited until the 70th minute to make an impact substitution. When Tamer Seyam and Ahmed Abu Nahyeh (who was given all of four minutes to play) did come on Palestine were a lot sharper in attack.

This game will most likely be quickly forgotten but the coaching staff will have a number of decisions to make as to who starts in key positions going forward.

What I didn't like: Attendance. No excuse for such paltry numbers. Yes a 6 PM kickoff and a far flung stadium don't exactly help things but the fans need to take more pride and aim to recreate the atmosphere from the UAE game for every national team match.

What I liked: The debutants were all very good tonight. Carlos Salom will only get better as he adapts to his teammates, Alaa Abu Saleh didn't look like a debutant, and Moamin Gharbieh seems like a good option to have as foil to the oldest player in the national team- Alexis Norambuena.

Rotation: Sameh Mar'aba last couple of national teams leave a lot to be desired and I would be shocked to see him start again in Dushanbe next month. More options are available to Barakat than ever before and any player that didn't preform well tonight is acutely aware of who his replacement could be.

It should be clear that Jaka Ihbeisheh is the team's best right winger and playing him as a fullback (although he is versatile enough to play there) should only be done in emergency situations. I would have rather given a chance tonight to Gharbieh or Battat and played Jaka further up the pitch. Second half subs should have been used more liberally instead of letting Tajikistan creep back into the game. The coaching staff should also consider the possibility of Toufic Ali sitting a game so that Rami Hammadi can get valuable experience.

Man of the Match: A good debut for Carlos Salom. He made some mistakes here and there (and sometimes didn't pass when he should have) but he provides the ability to drive an attack from deep- an element Palestine lacks at the moment.

What's Next: Palestine meet Tajikistan again next month on October 3rd in Dushanbe.