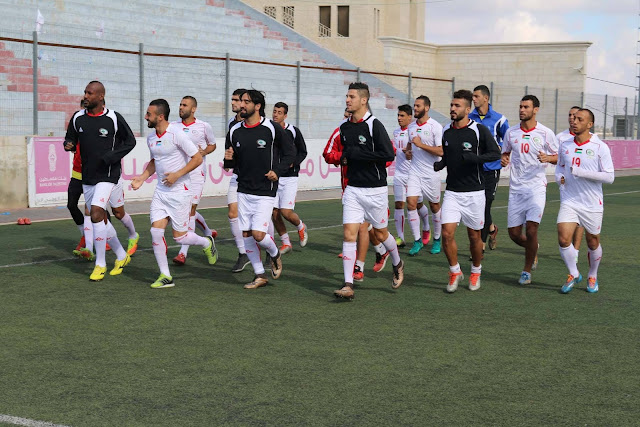 Full preview after the jump...

The big story surrounding the national team is the continued absence of national team manager Abdel Nasser Barakat due to family issues. He had to rush home unexpectedly last month before the second friendly against Tajikistan leaving managerial duties to Noureddine Ould Ali.

Mahmoud Eid will grace the national team for the first time in over a year. His last game came against Timor-Leste in World Cup qualifying when he was still was with third division side Nyköpping. His meteoric rise has seen him light up the second division and secure a well deserved move to Allsvenskan side Kalmar. In an auxiliary role- Mahmoud Eid has made the most of his 320 minutes in the side- notching two goals in three starts and 10 overall appearances.

It's a conquering return for Eid who was blamed by some in the media for Palestine's anemic attack.

Ahmed Awad, who scored on his debut against Timor Leste is also back in the squad. He played a big role in Dalkurd's near back-to-back promotion efforts having acclimated well to the Superettan. He didn't quite hit the goalscoring heights of last year (11) but six from 26 starts is nothing to scoff at and could be in line for his first start.

The captain, Abdelatif Bahdari is also back despite not having played for Egyptian side Tale'a El-Geish. The consensus amongst the club's and national team's staffs is that the player is match fit having missed preseason awaiting an exit permit to leave Gaza.

The Malaysia based triumvirate of Matías Jadue, Jonathan Cantillana, and Yashir Pinto Islame have not been called up perhaps to give them an opportunity to rest up following the culmination of their seasons.

Carlos Salom whose fine form with Union Española in Chile has him near the top of the scorer's charts pulled out following a disagreement over his travel itinerary.

Much like Palestine, Lebanon is in the midst of a rebuilding project. While the likes of Dodo and Roda Antar (both experienced Bundesliga players), and Abbas Atwi stuck out the World Cup qualifying campaign they have since stepped aside in the hopes that a younger generation can take the national team to new heights.


Lebanon has always had talent yet always seem to be unable to get out of their own way to success. Their Cinderella story during World Cup qualifying imploded when it was revealed players took bribes to throw their home match vs. Qatar.

A year later, Lebanon failed to push for a fifth goal in a 4-2 win over Thailand which saw the final Asian Cup slot go to China on goal difference.

Much like Palestine, the Lebanese are looking far and wide for talent and although this squad has a more local feel to it; it does feature players who play in Norway, UAE, Germany, and Indonesia.

Time for a new GK? Other experiments?

Toufic Ali has featured in every minuted of every official match for Palestine since the final match of the 2015 Asian Cup. Shabab Al-Khaleel has gotten off to a stuttering start this season and Toufic Ali has not been blameless by any stretch of the imagination. Conceding one of the worst goals in WBPL history.

In complete juxtaposition, Rami Hamadi has been on fire for surprise league leaders Thaqafi Tulkarem conceding just once in five appearances.

Barakat and his staff don't have a reputation for wild experiments. All 12 matches of his tenure feature roughly the same formation: 4-4-1-1. The midfield makes use of two pivotes to shield the defence, which has helped Palestine grind out results against stronger teams during World Cup qualifying. Its limits means Palestine's attacking threat needs to come on transition but countering at speed is something that Palestine has yet to get a handle on. Without Pablo Tamburrini in the fold there will at least be new personnel to consider.