January 31, 2017
A second half fight back saw Shabab Al-Khaleel capture an important victory in the first leg of their 2017 AFC Cup playoff vs. Al-Suwaiq.

The Omani side gained access to the competition vis-a-vis their status as runners up in the Omani League last season. Shabab Al-Khaleel for their part were crowned WBPL champions in 2015/16 with relative ease.

Both sides have had a tough time of it lately with neither side mounting anything close to resembling a title challenge. Al-Suwaiq are just above the relegation zone while Shabab Al-Khaleel are a whopping 14 points off the pace set by Hilal Al-Quds.

To put it simply, this was a must win for both teams.

With frosty conditions in Dura ever present this time of year, Shabab Al-Khaleel were keen to press the advantage- as were the thousands of Shabab supporters who made the 10 km trip to the internationally sanctioned ground.

Shabab started strong but missed a handful of good chances most notably with Osama Shaban failing to convert after good interplay from Ashraf Nu'man and Ahmed Abu Nahyeh. Moments later Shaban's penetrating run into the box resulted in a cross that was blocked by the hand of an Al-Suwaiq defender but ensuing demands for a penalty were waived off by the Jordanian referee.

Al-Suwaiq's dominance of the right flank was finally rewarded after 36 minutes with what seemed to be a crucial goal. Hassan Al-Saadi making no mistake in opening the scoring.

Shabab Al-Khaleel were punch drunk for the rest of the first half but a second half change galvanized them.

Ayman Sandouqa brought on Fahed Attal for Muamin Eghbariyeh- who had been playing on the right wing and then had the veteran play as as striker with Ahmed Abu Nahyeh deployed on the right to provide the thrust needed to divert Al-Suwaiq's overload on the wing.

The change proved to be the right tonic; as Shabab were more comfortable in possession. The goal-shy Hebronites would find their goals through two free kicks by Hamed Ghanyem- who teed up Fahed Attal for the equalizer in the 56th minute and Abu Nahyeh for the winner in the 73rd.

In the post match press conference, Al-Suwaiq's Iraqi coach blamed a slew of absences (due to the Military World Cup) for the loss but was confident his charges could overturn the deficit next week in Oman.

Shabab Al-Khaleel travel to the Sultanate later this week knowing that a draw or a high scoring one goal loss would see them through to the group stage. Progression would be sweet revenge for Palestinian sides who saw their allocation reduced from 1.5 spot to a lone half spot on short notice by the AFC. 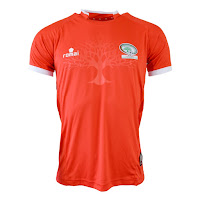 Want to look good while you support the Palestine national team? Why not pick up an official jersey at our online store. Pricing starts at 55 Euros with FREE worldwide shipping. Click here to purchase!