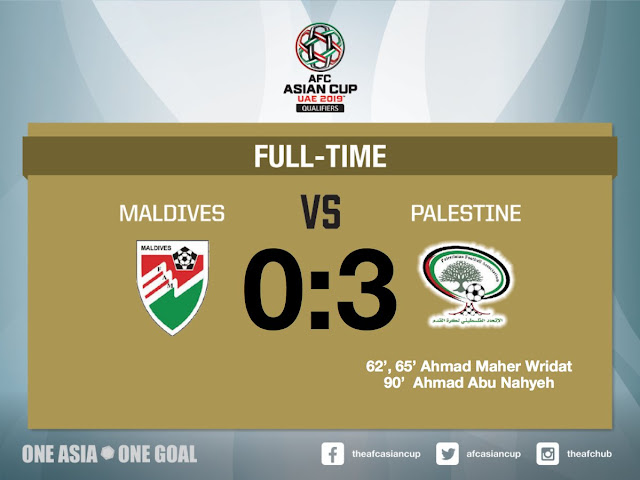 Full highlights and more after the jump...


Recap: A dour first half display was expected once the starting lineups were revealed. Abdel Nasser Barakat made a single change from the starting eleven that faced Yemen. Abu Nahyeh was replaced by the scorer of the lone goal in that game while a midfield triumvirate of Yameen, Darweesh, and Shaban was retained. Palestine created precious little in the first half as a stout and resolute Maldivian defence afforded little space in the middle of the pitch.

Palestine's fullbacks did make the most of the space afforded them on the flanks but Mus'ab Battat, making a surprise start over veterans Jaka Ihbeisheh and Alexis Norambuena was always a liability in defence. For their part, the islanders always seemed a threat on the counter and although their efforts on goal were somewhat of rarity. Brash tackles by Mus'ab Battat and several midfielders covering for the Shabab Al-Dhahrieh man went unpunished by the Uzbek referee.

Palestine took more initiative to attack in the second half and were nearly rewarded. A long ball found its way to Jonathan but the Ahli Al-Khaleel star fluffed his lines while one on one with the Maldivian keeper.

At the hour mark, Abdel Nasser Barakat made a much needed change brining on Ahmad Maher Wridat for the ineffective Mohammed Yameen. The change sparked an immediate reaction. With his first touch of the game, Wridat burst on to a loose ball in midfield, played a one-two with Seyam, and blasted Palestine ahead. Less than five minutes later, the same two players combined, this time Wridat managed to sneak his finish under the keeper's body for his eighth international goal.

The Maldivinians made a flurry of subs and attacked relentlessly in the hopes of capitalizing off a Palestinian mistake. On this night however their efforts were in vain. Palestine mitigated whatever mistakes they made with professional fouls and more than one free kicks failed to trouble Rami Hamadi.

In the 87th minute, Ahmad Abu Nahyeh replaced the hard working Pinto who had done his part with hold up play and acted as a battering ram against the Maldivian defence. The Shabab Al-Khaleel man might not be having the best season at club level but you would not have known that by the confidence exhibited during his six minutes on the field.

Jonathan Cantillana- who spurred another fine chance in the second half sent the diminutive striker through- he duly finished to give Palestine three goals and an all important three points.

What I liked: Good teams find a way to win in hostile environments when things aren't going their way. For 60 minutes, Palestine were having trouble coping with the bumpy pitch and the Maldivian gameplan had worked like a charm. They were unsettled until Ahmad Maher came on to confidently change the complexion of the game. Three point and a 3-0 win means Palestine can take firm control of this group with a win vs. Oman.

What I didn't like: You have to go with players who are in form. The formation and some of the personnel was perplexing and it almost cost Palestine two points. A formation should also make use of the team's best players. Palestine has wonderful attacking talent and many of these players have yet to be fully utilized.  I do not see the use of calling up two players who are currently without a club; playing them is an insult to the rest of the players in the side. There has to be hunger and competition for spots in this team- that's what separates the mediocre players from the good ones.

Make no mistake, this night belongs to two men who a year ago were in the stands watching Palestine play- Rami Hamadi and Ahmad Maher. 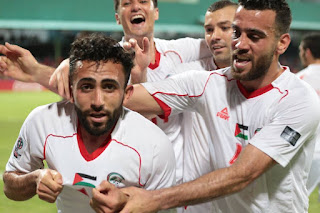 Man of the Match: For obvious reasons, Ahmad Maher.

Jersey Watch: Ugh somebody sort out the supply issue/disagreement with Romai. These Peak Jerseys are beneath us.

Qualifying Roundup: A Levantine sweep marked Match Day 1. Lebanon beat Hong Kong 2-0 in Beirut while Jordan smashed seven past Cambodia in Amman. Elsewhere in West Asia, Yemen came from behind to beat Tajikistan 2-1. In the other Group D game Oman put 14 goals past lowly Bhutan. The only Arab side not to emerge victorious on the night was Bahrain who played out the only scoreless game of the night: 0-0 at home to Singapore.

In the other big game of the day, India broke a near 70 year old hex by winning against Myanmar. A result that will surely make the bigwigs of Asian Football happy. There were also wins for Philippines (4-1 vs. Nepal) and Kyrgyzstan (1-0 over Macao). Afghanistan played out the only score draw of the day 1-1 at 'home' to Vietnam.

What's Next: Palestine face Oman at home in the Faisal Al-Husseini Memorial Stadium on June 13th.