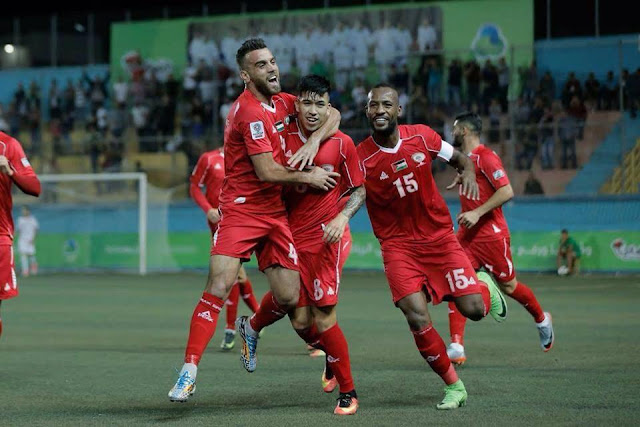 On Tuesday, the national team played their first fixture on the grounds of the Faisal Al-Husseini International stadium in nearly two years.

A fantastic first half from Al-Fida'i served as a platform for the win who held out in the second half to wrest control of Group D and make qualification a near certainty
.

Below are our ratings for the performance of all 14 players that participated in the victory.

*Note: All players start with a 5 and are graded upwards or downwards


Rami Hamadi (6.5): Saw his shutout streak end at 405 minutes as Ahmed Mubarak curled a beautiful free kick on to the cross bar and in. There was very little the Thaqafi Tulkarem goalkeeper could do to keep Oman's best effort on the night out of the net. Other than that, Hamadi was steady- keeping an early effort from a tight angle, stopping an effort off a corner, and collecting crosses. (ACQ Average: 6.5)

Musab Al-Battat (7): A much better performance from the young full back who paid back Abdel Nasser Barakat's faith in him. When he was caught out of position, Al-Battat used his blistering speed to make up ground quickly. Got forward and combined well with Jonathan. (ACQ Average: 5.75)

Haitham Dheeb (6.5): A near flawless night for the man from Majd Al-Krum blighted only by the fact that he gave up the foul that lead to the free kick goal. Could have opened the scoring six minutes in- but powered his header wide of Ali Al-Habsi's goal. (ACQ Average: 6.75)

Abdelatif Bahdari (6): The captain showed his age tonight, was solid in the air but had a few nervy moments- an attempt to clear the ball with a back heel could have caused problems. (ACQ Average: 6.25)

Abdallah Jaber (7): Got forward on more than one occasion and neutralized his opposite number on the left wing. (ACQ Average: 6.5)

Mohamed Darwish (7): Destroyed everything in his path and didn't pick up a yellow card- Oman could get nothing going in the middle of the pitch. (ACQ Average: 6.5)

Shadi Shaban (7): With his fellow bash brother in the middle of the pitch- helped control the game in the first half. Shaban's cross for the opener is perhaps his finest moment in a national team shirt (ACQ Average: 6.25)

Joanthan Cantillana (7.5): Couldn't finish his chances against Maldives but made up for that with the opener against Oman. Was absolutely dominant in the first half. (ACQ Average: 7)

Sameh Maraaba (6.5): Deployed just behind the striker- Maraaba created the opportunity that led to the second goal by picking the pocket of an Omani defender and racing towards Ali Al-Habsi's goal. (ACQ Average: 6.5)

Yashir Pinto Islame (8): Man of the match and deservedly so. Excellent hold up play, intelligent runs and a stunning goal to beat Ali Al-Habsi. (ACQ Average: 7)

Mohammed Yameen (5.5): Brought on to provide added energy in the middle of the pitch. Did his job with relatively little fanfare (ACQ Average: 5.25)

Alexis Norambuena (5.5): Brought on to replace Jonathan for the last quarter of an hour. Played out of position in midfield (N/A)

Ahmed Maher Wridat (5.5): Brought on for the last 10 minutes to threaten Omanis on the counter with his speed (N/A)

Abdel Nasser Barakat (8): A great night for the mild mannered Barakat who perhaps does not get as much credit as he deserves. He has corrected his mistakes from previous matches, ditching the experimental defensive triumvirate in midfield. 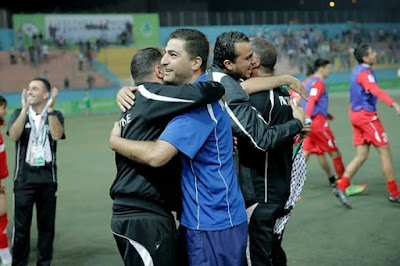 Barakat's choices were vindicated in the game's opening stanza and he dealt with the challenge of preparing the national team during Ramadan with aplomb.

Many in the press box found his choice of substitutions a little strange. Alexis Norambuena as a winger makes little sense especially when Jaka Ihbeisheh is available to provide stability and experience over the last quarter of an hour.

Ahmad Maher Wridat should have come on for Sameh Maraaba who was gassed and ended up straining his groin in the game's final minutes.

All that aside, Barakat has done great things with a team whose confidence was demolished after the 2015 Asian Cup. There is a balance between younger and more experienced players in the squad and the next two games against Bhutan should provide ample opportunity to tinker. This was Barakat's seventh win in 16 games- lifting him just above Jamal Mahmoud as the winningest coach (43% win percentage, 1.75 PPG).

Numbers aside, Barakat needed a signature win against a competent opponent to prove his credentials. This was it. (ACQ Average: 6.5)