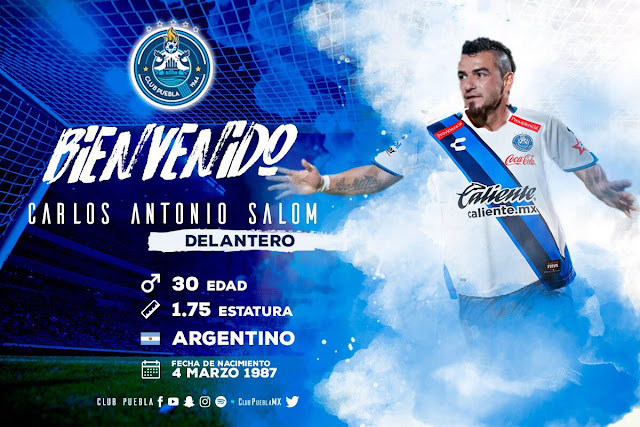 Carlos Salom, who was out of contract with Union Española of Chile, was always expected to move. During the winter transfer window, he was the subject of a bid from Egyptian giants Zamalek. Union Española turned down the bid in the hopes that Salom could help them go deep into the Copa Libertadores competition.

The club which stood to gain $600,000 from Zamalek, has now seen him depart for Liga MX side Puebla FC on a free transfer. The transfer makes Salom the first Palestinian to play in Liga MX.

Fellow Argentine-Palestinian Daniel Kabir Mustafa had a brief stint in the second tier of Mexican Football with Coras de Tepic but left the side without playing a match after a contract dispute.

In reference to his move, Carlos Salom stated his desire to prove his worth to his new club:

"I come here with the aspiration of helping the club get to the Liguilla Playoffs, that is the primary objective. On a personal level, they brought me here to score goals- and I have to fulfill those expectations. I have a new opportunity in my career and I have to seize it. The club has give me all the confidence and this very important for me, and for that I will give everything for this to be a good season for us.

Puebla finished 16th out of 18 clubs in Liga MX last season in the aggregate table.


Over in Asia, a much rumored move- Imad Zatara to Malaysian side Penang- fell through but waves were made elsewhere in Malaysia with Matías Jadue  announcing his departure from PKNS FC. Jadue played a vital role in the side's promotion last season and their run to the Malaysian FA Cup final.

He departs as PKNS's third leading goalscorer this season- 4 goals in 12 matches- despite being played out of position as an attacking midfielder and with 20 goals total in 41 matches as a PKNS Player.

His new port of call?

The Chilean born striker will wear the #32 at his new club and could make his debut as early as today for the club that sits seventh in the table- nine points behind the leaders Buriram United and five points behind the final AFC Cup place.