Much ado about the venue

Tuesday's match will mark only the seventh senior international on Palestinian soil since readmission to FIFA in 1998. Fanfare around the encounter has been somewhat subdued- this despite the fact that the national team is experiencing a historic run of good form. The FA has neglected to advertise or promote the match, information on tickets and public transport are unavailable, and the pitch itself is in disrepair.

Fans have been trying to self-organize while promotion of the even has fallen to benevolent journalists and even the players themselves.

On top of that, the decrepit and worn out artificial pitch at the Faisal Al-Husseini has not been replaced despite repeated promises to do so.

Results have been good for Palestine in 2017- 3 wins, 6 goals scored with a complementary 3 clean sheets. All three matches have featured a new tactical wrinkle- three defensive midfielders in the middle of the pitch. While this has helped bolster the defensive nous of the team the style has been none to pleasing on the eye.

The victory against Bahrain might have flattered a team that couldn't muster a shot on goal in the first half and the coaching staff would do well to remember that Rami Hamadi and the woodwork bailed them out several times in the first half.

Still a result in the stifling heat of Bahrain should give this squad plenty of confidence and enable them to take down their third West Asian opponent in 2017.

Expect Abdel Nasser Barakat to make minor changes to his starting XI with Khaled Salem and Alexis Norambuena the most likely candidates to make way.

The team from the Sultanate chose to camp in Amman for the majority of the period before the game only arrived in Palestine today. Their lineup of is headlined by one of Asia's biggest stars over the last decade- Ali Al-Habsi. The goalkeeper defied all expectations this season- earning an extension on his contract after being named to the EFL Championship team of the season.

The former fireman nearly led Reading to Premier League promotion only to be denied cruelly on penalty kicks in the playoff final vs. Huddersfield Town.

The other foreign based players in the squad are Al-Dharafa's (UAE) Khaled Al-Hajiri, Ahmed Mubarak of Al-Mekhriya (Qatar), and Mohammed Al-Rawahi- who recently joined Girona's C-team in the regional league of Catalonia.

Qasim Said- scorer of the winning goal four and a half years ago is also in the squad.

Despite the efforts of Pim Verbeek to integrate younger players in the squad the Omanis will be heavily reliant on the experience of Ahmed Mubarak & Ali Al-Habsi (over 100 caps). Oman's clubs have played three games on Palestinian soil but none have been at the Faisal Al-Husseini. Moreover, Shabab Al-Dhahrieh and both Hebron clubs won all three of their AFC Cup games against said Omani opposition in the shape of Fanja, Suwaiq, and Oruba.

Experience playing on the green monster of Faisal Al-Husseini might just tip the scales in Palestine's favor.

Oman warmed up for this encounter with a friendly encounter against a slightly weakened Syria team. Two second half goals- including a late equalizer for Syria saw the two West Asian sides battle to a 1-1 draw.

Khaled Al-Hajiri- who scored four in his debut for Oman notched his fifth goal of Oman in just his second cap. 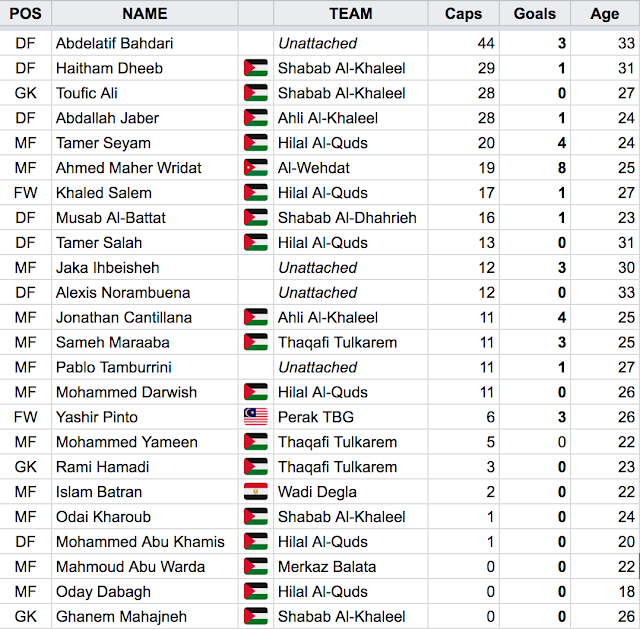