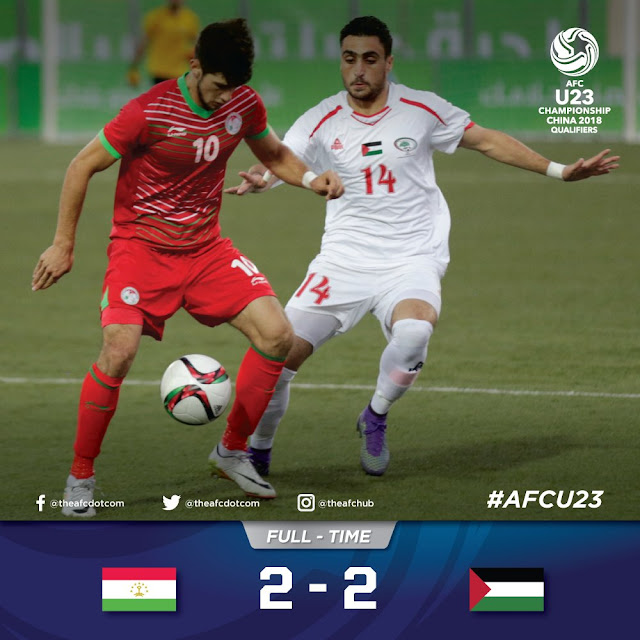 
Recap: Palestine's bright start was blighted only by an inability to convert chances. As expected Abu Warda and Oday Dabagh were orchestrators of the best attacks with the latter failing to convert an early header and a one-two.

Palestine would grab the opener after an excellent pass from Abu Warda found Yousef in the box. After dribbling past the keeper he was felled with a gaping goal. The referee exercised a deal of leniency by only cautioning Dovletyar.

Shabab Al-Khaleel's Fannoun stepped up and a thunderous effort was put to the Dovletyar's right.

Fifteen minutes later, Tajikistan would capitalize on a set piece opportunity after Abu Aker spilled a bouncing ball and a mix up in the clearance allowed for Firdavs Chakalov to bundle the ball over the line.

At half time, Sandouqa made the bold move of substituting his nephew- brining on Shabab Al-Dhahrieh's Bahaa Wridat. Through a combination of luck, skill, and Dura's artificial surface Palestine soon had an equalizer. Abu Warda's short corner was cut out- preventing an on rushing Dabagh from latching on- only for the ball to bobble up, hit the defender Zoir Jurabaev's knee and ricochet straight into the net.

Palestine's inability to control the middle of the pitch was evident throughout the game. Wridat could do nothing to provide stability to the proceedings and while positive sparks appeared every now and again in the shape of Abu Warda and Dabagh- you got the sense that Palestine needed a third goal to put this game away.

Dabagh would come close twice in the second half but for whatever reason- some commentators might cite a tinge of selfishness- he simply could not find the back of the net.

With thirty minutes past in the second half a series of uncontested short passes to carve the Palestinian defence. A Namir Agha harried challenge on Chakalov saw the ref take the opportunity to even things up. A penalty for the Tajiks brought them level and with fifteen minutes to go- Palestine could not muster a winner in a match they may live to regret.

What I liked: Palestine were missing two projected starters on their backline and responded well to adversity. Avoiding a loss against Tajikistan was crucial to have any realistic hope of going through so perhaps, given the circumstances, and what happens in the following games, 2-2 might not be a bad result.

What I didn't like: Preparation hasn't paid off. Yes, to lose Alaa Habous- who was expected to marshal the backline- is a blow. Omar Jehad's absence at right back was also felt.

That said, there were too many mistakes over the 90 minutes. Abu Aker should not have had any trouble collecting the ball that lead to the first goal. Oday Dabagh and the forwards should have been sharper in attack. The midfield, above all, was a disaster- and if that doesn't improve chance of qualifying will be slim and totally dependent on sneaking in as one of the best second place teams. 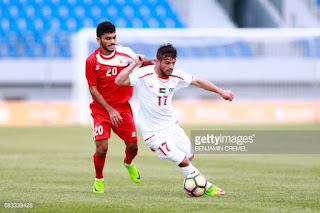 Man of the Match: Mahmoud Abu Warda. A real captain's performance with a hand in two goals and a non-stop motor.

UAE on six points should be well poised to finish amongst the five or six best runner ups.

China could potentially not qualify for the tournament after being held to a 0-0 draw by Cambodia, which would mean only the five best runners up would clinch a finals berth

The East Asian elite of Japan, Korea Republic, and Australia were victors by a combined score of 20-0. Although Australia could only put up two against Brunei.

There were a handful of upsets with Mongolia nicking a draw from Thailand on a water-logged pitch in Bangkok. Hong Kong also punched above their weight by earning a point against Korea DPR. While Laos continued to show signs of improvement with an unexpected 3-1 victory against Chinese Taipei.


What's Next: Palestine take on Group E favorites Jordan- who smashed Bangladesh 7-0 in their first game- on Friday, July 21st at 19:30 local time