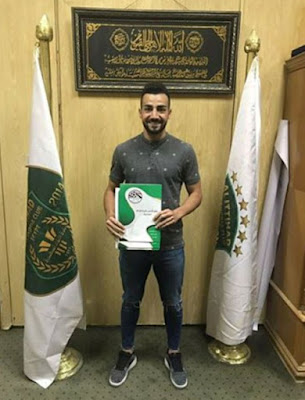 Abdallah Jaber has become the latest Palestinian player to move to a foreign league in this transfer window. The 24 year old left back has agreed a three year deal with Ittihad Alexandria of the Egyptian Premier League and will be expected to bolster the side who finished in eighth place last season.

The Tayibe native had been expected to join Alexandrian rivals Ismaily on a five year deal but the deal fell through just days earlier. Documents obtained by Football Palestine seem to point to a break down in negotiations after a signed agreement for a five year deal, dated July 11th, 2017, never materialized into a formal contract with the player.

Typically, parties have 30 days to hammer out details of the agreement and register the player with the FA.

After talks broke down, Ittihad swooped in offering the former Ahli Al-Khaleel and Hilal Al-Quds man a chance to make his first foreign move.


Abdallah Jaber was close to joining the Egyptian Premier League last year and even signed a contract with Arab Contractors. The deal however was voided days later for reasons that remain unclear.

Jaber will compete with Hesham Shehata and Mostafa Kalosha for a starting left back spot spot in Juan Jose Maqueda's side.
Palestinians Abroad